will we escape if we neglect so great a salvation—which at the first having been spoken through the Lord, was confirmed to us by those who heard.

“Sit at my right hand,
until I make your enemies the footstool of your feet?”[g]
Hebrews 1 [14.] Aren’t they all serving spirits, sent out to do service for the sake of those who will inherit salvation?

Hebrews 2 [1.] Therefore we ought to pay greater attention to the things that were heard, lest perhaps we drift away. For if the word spoken through angels proved steadfast, and every transgression and disobedience received a just recompense; how will we escape if we neglect so great a salvation—which at the first having been spoken through the Lord, was confirmed to us by those who heard; God also testifying with them, both by signs and wonders, by various works of power, and by gifts of the Holy Spirit, according to his own will? For he didn’t subject the world to come, of which we speak, to angels.

Hebrews 2 [6.] But one has somewhere testified, saying,

“What is man, that you think of him?
Or the son of man, that you care for him?
You made him a little lower than the angels.
You crowned him with glory and honor.[a]
You have put all things in subjection under his feet.”[b]
For in that he subjected all things to him, he left nothing that is not subject to him. But now we don’t see all things subjected to him, yet. But we see him who has been made a little lower than the angels, Jesus, because of the suffering of death crowned with glory and honor, that by the grace of God he should taste of death for everyone. 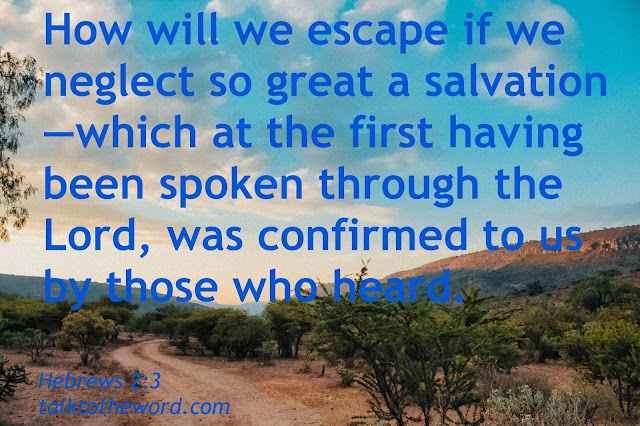