in the resurrection they neither marry, nor are given in marriage, but are like God’s angels in heaven.”

Matthew 22 [23.] On that day Sadducees (those who say that there is no resurrection) came to him. They asked him, saying, “Teacher, Moses said, ‘If a man dies, having no children, his brother shall marry his wife, and raise up offspring[a] for his brother.’ Now there were with us seven brothers. The first married and died, and having no offspring[b] left his wife to his brother. In the same way, the second also, and the third, to the seventh. After them all, the woman died. In the resurrection therefore, whose wife will she be of the seven? For they all had her.”

Matthew 22 [33.] When the multitudes heard it, they were astonished at his teaching. But the Pharisees, when they heard that he had silenced the Sadducees, gathered themselves together. One of them, a lawyer, asked him a question, testing him. “Teacher, which is the greatest commandment in the law?” 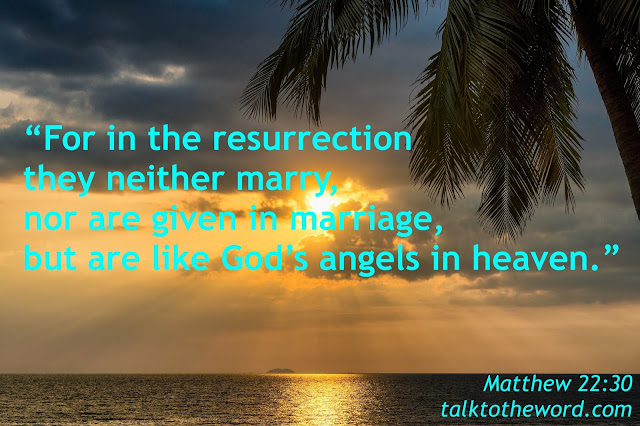