isn’t the hearers of the law who are righteous before God, but the doers of the law will be justified (for when Gentiles who don’t have the law do by nature the things of the law, these, not having the law, are a law to themselves, in that they show the work of the law written in their hearts, their conscience testifying with them, and their thoughts among themselves accusing or else excusing them) in the day when God will judge the secrets of men, according to my Good News, by Jesus Christ. 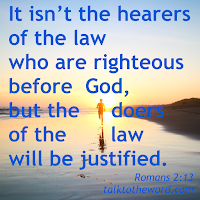 Romans 2 [10.] But glory, honor, and peace go to every man who does good, to the Jew first, and also to the Greek. For there is no partiality with God...