they came out, they found a man of Cyrene, Simon by name, and they compelled him to go with them, that he might carry his cross. They came to a place called “Golgotha”, that is to say, “The place of a skull.”

Matthew 27 [26.] Then he released to them Barabbas, but Jesus he flogged and delivered to be crucified. Then the governor’s soldiers took Jesus into the Praetorium, and gathered the whole garrison together against him. They stripped him, and put a scarlet robe on him. They braided a crown of thorns and put it on his head, and a reed in his right hand; and they kneeled down before him, and mocked him, saying, “Hail, King of the Jews!” They spat on him, and took the reed and struck him on the head. When they had mocked him, they took the robe off of him, and put his clothes on him, and led him away to crucify him.


Matthew 27 [32.] As they came out, they found a man of Cyrene, Simon by name, and they compelled him to go with them, that he might carry his cross. They came to a place called “Golgotha”, that is to say, “The place of a skull.” They gave him sour wine[c] to drink mixed with gall. When he had tasted it, he would not drink.

Matthew 27 [35.] When they had crucified him, they divided his clothing among them, casting lots,[d] and they sat and watched him there. They set up over his head the accusation against him written, “THIS IS JESUS, THE KING OF THE JEWS.”

Matthew 27 [38.] Then there were two robbers crucified with him, one on his right hand and one on the left. Those who passed by blasphemed him, wagging their heads, and saying, “You who destroy the temple, and build it in three days, save yourself! If you are the Son of God, come down from the cross!”

Matthew 27 [41.] Likewise the chief priests also mocking, with the scribes, the Pharisees,[e] and the elders, said, “He saved others, but he can’t save himself. If he is the King of Israel, let him come down from the cross now, and we will believe in him. He trusts in God. Let God deliver him now, if he wants him; for he said, ‘I am the Son of God.’” The robbers also who were crucified with him cast on him the same reproach.

Matthew 27 [45.] Now from the sixth hour[f] there was darkness over all the land until the ninth hour.[g] About the ninth hour Jesus cried with a loud voice, saying, “Eli, Eli, lima[h] sabachthani?” That is, “My God, my God, why have you forsaken me?”[I] 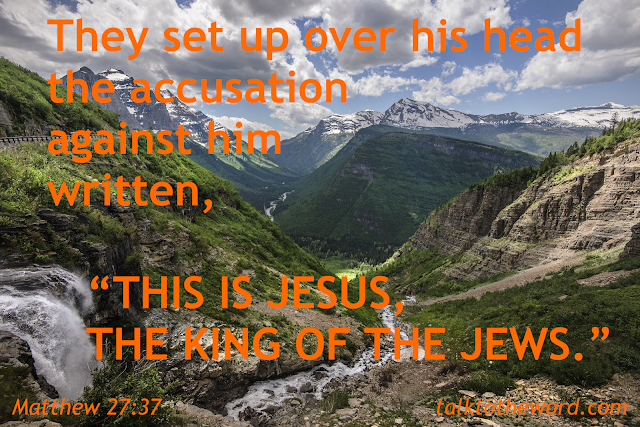