said to them, “Go into all the world, and preach the Good News to the whole creation.”

Mark 16 [8.] They went out,[a] and fled from the tomb, for trembling and astonishment had come on them. They said nothing to anyone; for they were afraid. [b]Now when he had risen early on the first day of the week, he appeared first to Mary Magdalene, from whom he had cast out seven demons. She went and told those who had been with him, as they mourned and wept. When they heard that he was alive, and had been seen by her, they disbelieved. After these things he was revealed in another form to two of them, as they walked, on their way into the country. They went away and told it to the rest. They didn’t believe them, either.

Mark 16 [14.] Afterward he was revealed to the eleven themselves as they sat at the table, and he rebuked them for their unbelief and hardness of heart, because they didn’t believe those who had seen him after he had risen. He said to them, “Go into all the world, and preach the Good News to the whole creation. He who believes and is baptized will be saved; but he who disbelieves will be condemned. These signs will accompany those who believe: in my name they will cast out demons; they will speak with new languages; they will take up serpents; and if they drink any deadly thing, it will in no way hurt them; they will lay hands on the sick, and they will recover.”

Mark 16 [19.] So then the Lord,[c] after he had spoken to them, was received up into heaven, and sat down at the right hand of God. They went out, and preached everywhere, the Lord working with them, and confirming the word by the signs that followed. Amen.

a. Mark 16:8 TR adds “quickly”.
b. Mark 16:9 NU includes the text of verses 9-20, but mentions in a footnote that a few manuscripts omitted it. The translators of the World English Bible regard Mark 16:9-20 as reliable based on an overwhelming majority of textual evidence, including not only the authoritative Greek Majority Text New Testament, but also the TR and many of the manuscripts cited in the NU text.
c. Mark 16:19 NA adds “Jesus”. 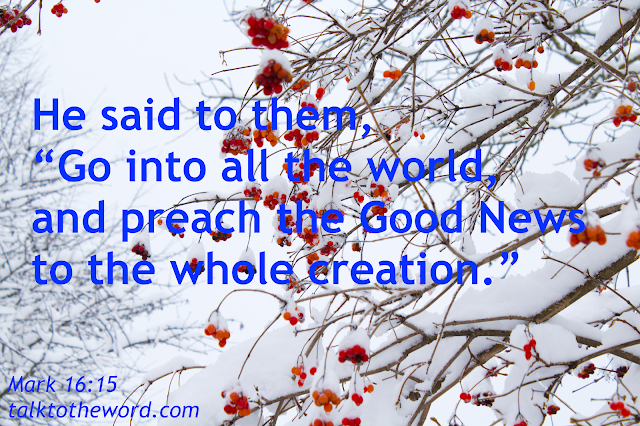