stone which the builders rejected, the same was made the chief cornerstone.’”

Luke 20 [14.] “But when the farmers saw him, they reasoned among themselves, saying, ‘This is the heir. Come, let’s kill him, that the inheritance may be ours.’ They threw him out of the vineyard, and killed him. What therefore will the lord of the vineyard do to them? He will come and destroy these farmers, and will give the vineyard to others.”

When they heard it, they said, “May it never be!”

‘The stone which the builders rejected,
the same was made the chief cornerstone?’[c]
Everyone who falls on that stone will be broken to pieces,
but it will crush whomever it falls on to dust.”

Luke 20 [19.] The chief priests and the scribes sought to lay hands on him that very hour, but they feared the people—for they knew he had spoken this parable against them. They watched him, and sent out spies, who pretended to be righteous, that they might trap him in something he said, so as to deliver him up to the power and authority of the governor. They asked him, “Teacher, we know that you say and teach what is right, and aren’t partial to anyone, but truly teach the way of God. Is it lawful for us to pay taxes to Caesar, or not?”

Luke 20 [23.] But he perceived their craftiness, and said to them, “Why do you test me? Show me a denarius. Whose image and inscription are on it?”


keystone - opposite
PIB Scriptures are derived from the World English Bible 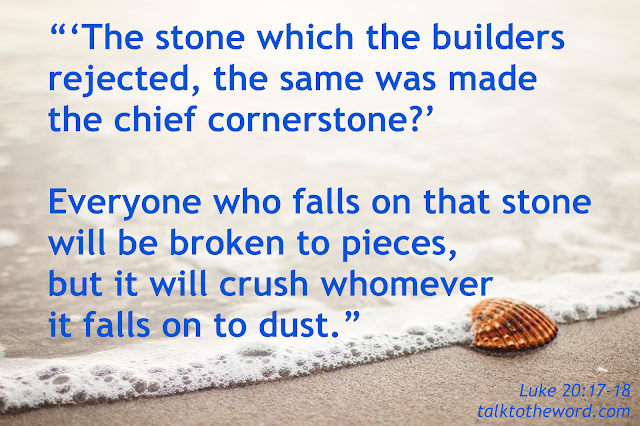