Luke 16 [31.] “He said to him, ‘If they don’t listen to Moses and the prophets, neither will they be persuaded if one rises from the dead.’”

Luke 17 [1.] He said to the disciples, “It is impossible that no occasions of stumbling should come, but woe to him through whom they come! It would be better for him if a millstone were hung around his neck, and he were thrown into the sea, rather than that he should cause one of these little ones to stumble. Be careful. If your brother sins against you, rebuke him. If he repents, forgive him. If he sins against you seven times in the day, and seven times returns, saying, ‘I repent,’ you shall forgive him.”

Luke 17 [6.] The Lord said, “If you had faith like a grain of mustard seed, you would tell this sycamore tree, ‘Be uprooted, and be planted in the sea,’ and it would obey you. But who is there among you, having a servant plowing or keeping sheep, that will say, when he comes in from the field, ‘Come immediately and sit down at the table,’ and will not rather tell him, ‘Prepare my supper, clothe yourself properly, and serve me, while I eat and drink. Afterward you shall eat and drink’? Does he thank that servant because he did the things that were commanded? I think not. Even so you also, when you have done all the things that are commanded you, say, ‘We are unworthy servants. We have done our duty.’”


karma
PIB Scriptures are derived from the World English Bible 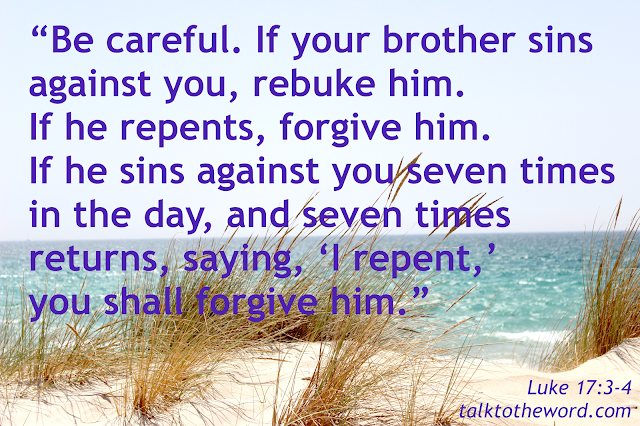