to enter in by the narrow door, for many, I tell you, will seek to enter in, and will not be able.”

Luke 13 [18.] He said, “What is God’s Kingdom like? To what shall I compare it? It is like a grain of mustard seed, which a man took, and put in his own garden. It grew, and became a large tree, and the birds of the sky live in its branches.”

Luke 13 [20.] Again he said, “To what shall I compare God’s Kingdom? It is like yeast, which a woman took and hid in three measures[a] of flour, until it was all leavened.”

Luke 13 [22.] He went on his way through cities and villages, teaching, and traveling on to Jerusalem. One said to him, “Lord, are they few who are saved?”

He said to them, “Strive to enter in by the narrow door, for many, I tell you, will seek to enter in, and will not be able. When once the master of the house has risen up, and has shut the door, and you begin to stand outside, and to knock at the door, saying, ‘Lord, Lord, open to us!’ then he will answer and tell you, ‘I don’t know you or where you come from.’ Then you will begin to say, ‘We ate and drank in your presence, and you taught in our streets.’ He will say, ‘I tell you, I don’t know where you come from. Depart from me, all you workers of iniquity.’ There will be weeping and gnashing of teeth, when you see Abraham, Isaac, Jacob, and all the prophets, in God’s Kingdom, and yourselves being thrown outside. They will come from the east, west, north, and south, and will sit down in God’s Kingdom. Behold, there are some who are last who will be first, and there are some who are first who will be last.”


exit
PIB Scriptures are derived from the World English Bible 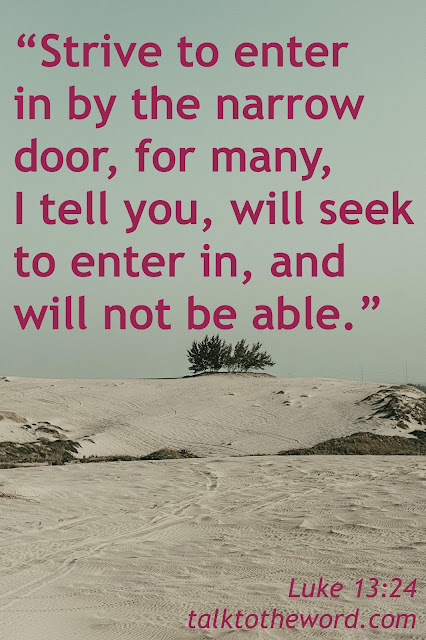