so loved the world, that he gave his one and only Son, that whoever believes in him should not perish, but have eternal life.”

John 3 [4.] Nicodemus said to him, “How can a man be born when he is old? Can he enter a second time into his mother’s womb, and be born?”

John 3 [10.] Jesus answered him, “Are you the teacher of Israel, and don’t understand these things? Most certainly I tell you, we speak that which we know, and testify of that which we have seen, and you don’t receive our witness. If I told you earthly things and you don’t believe, how will you believe if I tell you heavenly things? No one has ascended into heaven, but he who descended out of heaven, the Son of Man, who is in heaven. As Moses lifted up the serpent in the wilderness, even so must the Son of Man be lifted up, that whoever believes in him should not perish, but have eternal life. For God so loved the world, that he gave his one and only Son, that whoever believes in him should not perish, but have eternal life. For God didn’t send his Son into the world to judge the world, but that the world should be saved through him. He who believes in him is not judged. He who doesn’t believe has been judged already, because he has not believed in the name of the one and only Son of God. This is the judgment, that the light has come into the world, and men loved the darkness rather than the light; for their works were evil. For everyone who does evil hates the light, and doesn’t come to the light, lest his works would be exposed. But he who does the truth comes to the light, that his works may be revealed, that they have been done in God.”


eternity
PIB Scriptures are derived from the World English Bible 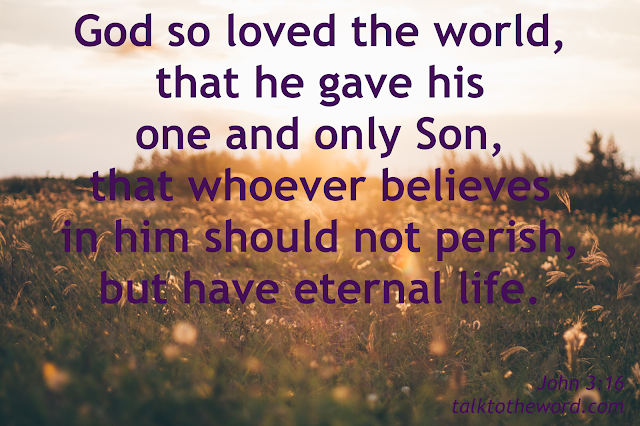