the Counselor has come, whom I will send to you from the Father, the Spirit of truth, who proceeds from the Father, he will testify about me. You will also testify, because you have been with me from the beginning.”

John 15 [17.] “I command these things to you, that you may love one another. If the world hates you, you know that it has hated me before it hated you. If you were of the world, the world would love its own. But because you are not of the world, since I chose you out of the world, therefore the world hates you. Remember the word that I said to you: ‘A servant is not greater than his lord.’[a] If they persecuted me, they will also persecute you. If they kept my word, they will keep yours also. But all these things will they do to you for my name’s sake, because they don’t know him who sent me. If I had not come and spoken to them, they would not have had sin; but now they have no excuse for their sin. He who hates me, hates my Father also. If I hadn’t done among them the works which no one else did, they wouldn’t have had sin. But now have they seen and also hated both me and my Father. But this happened so that the word may be fulfilled which was written in their law, ‘They hated me without a cause.’[b]

John 15 [26.] “When the Counselor[c] has come, whom I will send to you from the Father, the Spirit of truth, who proceeds from the Father, he will testify about me. You will also testify, because you have been with me from the beginning.

John 16 [1.] “These things have I spoken to you, so that you wouldn’t be caused to stumble. They will put you out of the synagogues. Yes, the time comes that whoever kills you will think that he offers service to God. They will do these things[a] because they have not known the Father, nor me. But I have told you these things, so that when the time comes, you may remember that I told you about them. I didn’t tell you these things from the beginning, because I was with you. But now I am going to him who sent me, and none of you asks me, ‘Where are you going?’ But because I have told you these things, sorrow has filled your heart. Nevertheless I tell you the truth: It is to your advantage that I go away, for if I don’t go away, the Counselor won’t come to you. But if I go, I will send him to you. When he has come, he will convict the world about sin, about righteousness, and about judgment; about sin, because they don’t believe in me; about righteousness, because I am going to my Father, and you won’t see me any more; about judgment, because the prince of this world has been judged.


witnessing
PIB Scriptures are derived from the World English Bible 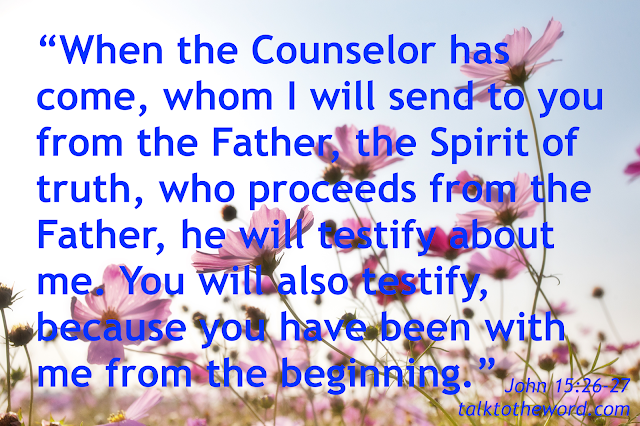