all the land were no women found so beautiful as the daughters of Job. Their father gave them an inheritance among their brothers.


Job 42 [10.] Yahweh turned the captivity of Job, when he prayed for his friends. Yahweh gave Job twice as much as he had before. Then came there to him all his brothers, and all his sisters, and all those who had been of his acquaintance before, and ate bread with him in his house. They comforted him, and consoled him concerning all the evil that Yahweh had brought on him. Everyone also gave him a piece of money,[a] and everyone a ring of gold.

Job 42 [12.] So Yahweh blessed the latter end of Job more than his beginning. He had fourteen thousand sheep, six thousand camels, one thousand yoke of oxen, and a thousand female donkeys. He had also seven sons and three daughters. He called the name of the first, Jemimah; and the name of the second, Keziah; and the name of the third, Keren Happuch. In all the land were no women found so beautiful as the daughters of Job. Their father gave them an inheritance among their brothers. After this Job lived one hundred forty years, and saw his sons, and his sons’ sons, to four generations. So Job died, being old and full of days.


female
PIB Scriptures are derived from the World English Bible 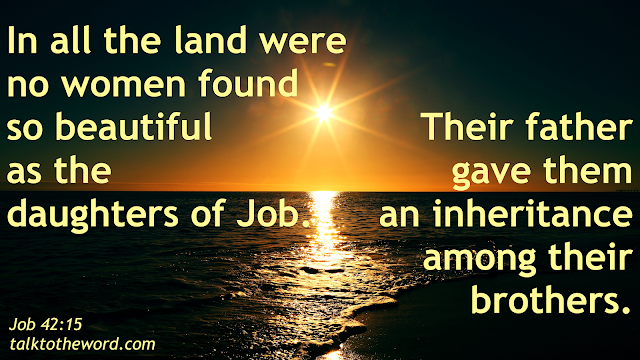