Job 34 [20.] In a moment they die, even at midnight.
The people are shaken and pass away.
The mighty are taken away without a hand.
“For his eyes are on the ways of a man.
He sees all his goings.
There is no darkness, nor thick gloom,
where the workers of iniquity may hide themselves.
For he doesn’t need to consider a man further,
that he should go before God in judgment.
He breaks in pieces mighty men in ways past finding out,
and sets others in their place.
Therefore he takes knowledge of their works.
He overturns them in the night, so that they are destroyed.
He strikes them as wicked men
in the open sight of others;
because they turned aside from following him,
and wouldn’t pay attention to any of his ways,
so that they caused the cry of the poor to come to him.
He heard the cry of the afflicted.
When he gives quietness, who then can condemn?
When he hides his face, who then can see him?
Alike whether to a nation, or to a man,

Job 34 [30.] that the godless man may not reign,
that there be no one to ensnare the people.
“For has any said to God,
‘I am guilty, but I will not offend any more.
Teach me that which I don’t see.
If I have done iniquity, I will do it no more’?
Shall his recompense be as you desire, that you refuse it?
For you must choose, and not I.
Therefore speak what you know.
Men of understanding will tell me,
yes, every wise man who hears me:
‘Job speaks without knowledge.
His words are without wisdom.’
I wish that Job were tried to the end,
because of his answering like wicked men.
For he adds rebellion to his sin.
He claps his hands among us,
and multiplies his words against God.”


regret
PIB Scriptures are derived from the World English Bible 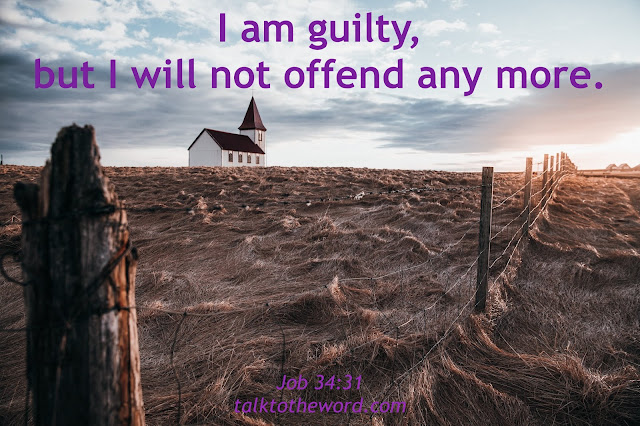