anyone doesn’t stumble in word, the same is a perfect man, able to bridle the whole body also.

James 2 [19.] You believe that God is one. You do well. The demons also believe, and shudder. But do you want to know, vain man, that faith apart from works is dead? Wasn’t Abraham our father justified by works, in that he offered up Isaac his son on the altar? You see that faith worked with his works, and by works faith was perfected; and the Scripture was fulfilled which says, “Abraham believed God, and it was accounted to him as righteousness”;[e] and he was called the friend of God. You see then that by works, a man is justified, and not only by faith.

James 2 [25.] In the same way, wasn’t Rahab the prostitute also justified by works, in that she received the messengers, and sent them out another way? For as the body apart from the spirit is dead, even so faith apart from works is dead.

James 3 [1.] Let not many of you be teachers, my brothers, knowing that we will receive heavier judgment. For in many things we all stumble. If anyone doesn’t stumble in word, the same is a perfect man, able to bridle the whole body also. Indeed, we put bits into the horses’ mouths so that they may obey us, and we guide their whole body. Behold,[a] the ships also, though they are so big and are driven by fierce winds, are yet guided by a very small rudder, wherever the pilot desires.

James 3 [5.] So the tongue is also a little member, and boasts great things. See how a small fire can spread to a large forest! And the tongue is a fire. The world of iniquity among our members is the tongue, which defiles the whole body, and sets on fire the course of nature, and is set on fire by Gehenna.[b] For every kind of animal, bird, creeping thing, and sea creature, is tamed, and has been tamed by mankind. But nobody can tame the tongue. It is a restless evil, full of deadly poison. With it we bless our God and Father, and with it we curse men, who are made in the image of God.

James 3 [10.] Out of the same mouth comes blessing and cursing. My brothers, these things ought not to be so. Does a spring send out from the same opening fresh and bitter water? Can a fig tree, my brothers, yield olives, or a vine figs? Thus no spring yields both salt water and fresh water. 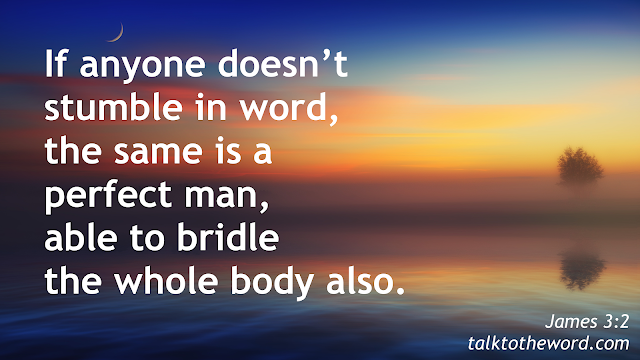