have come to Mount Zion, and to the city of the living God, the heavenly Jerusalem, and to innumerable multitudes of angels.

Hebrews 12 [14.] Follow after peace with all men, and the sanctification without which no man will see the Lord, looking carefully lest there be any man who falls short of the grace of God; lest any root of bitterness springing up trouble you, and many be defiled by it; lest there be any sexually immoral person, or profane person, like Esau, who sold his birthright for one meal. For you know that even when he afterward desired to inherit the blessing, he was rejected, for he found no place for a change of mind though he sought it diligently with tears. For you have not come to a mountain that might be touched, and that burned with fire, and to blackness, darkness, storm, the sound of a trumpet, and the voice of words; which those who heard it begged that not one more word should be spoken to them, for they could not stand that which was commanded, “If even an animal touches the mountain, it shall be stoned”[d];[e] and so fearful was the appearance that Moses said, “I am terrified and trembling.”[f]

Hebrews 12 [22.] But you have come to Mount Zion, and to the city of the living God, the heavenly Jerusalem, and to innumerable multitudes of angels, to the general assembly and assembly of the firstborn who are enrolled in heaven, to God the Judge of all, to the spirits of just men made perfect, to Jesus, the mediator of a new covenant,[g] and to the blood of sprinkling that speaks better than that of Abel.


angels
PIB Scriptures are derived from the World English Bible 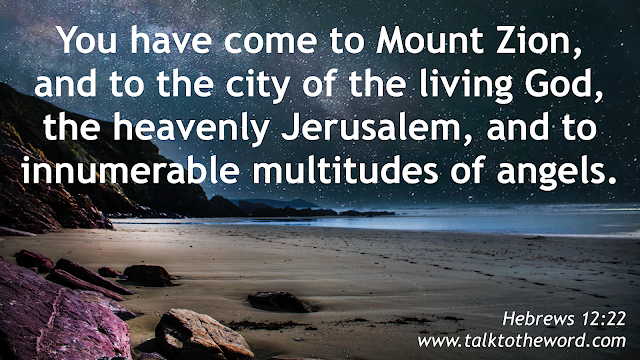