assemblies throughout all Judea and Galilee and Samaria had peace, and were built up. They were multiplied, walking in the fear of the Lord and in the comfort of the Holy Spirit.

Acts 9 [22.] But Saul increased more in strength, and confounded the Jews who lived at Damascus, proving that this is the Christ. When many days were fulfilled, the Jews conspired together to kill him, but their plot became known to Saul. They watched the gates both day and night that they might kill him, but his disciples took him by night, and let him down through the wall, lowering him in a basket. When Saul had come to Jerusalem, he tried to join himself to the disciples; but they were all afraid of him, not believing that he was a disciple. But Barnabas took him, and brought him to the apostles, and declared to them how he had seen the Lord on the way, and that he had spoken to him, and how at Damascus he had preached boldly in the name of Jesus. He was with them entering into[d] Jerusalem, preaching boldly in the name of the Lord Jesus.[e] He spoke and disputed against the Hellenists,[f] but they were seeking to kill him.

Acts 9 [30.] When the brothers[g] knew it, they brought him down to Caesarea, and sent him off to Tarsus. So the assemblies throughout all Judea and Galilee and Samaria had peace, and were built up. They were multiplied, walking in the fear of the Lord and in the comfort of the Holy Spirit.

Acts 9 [32.] As Peter went throughout all those parts, he came down also to the saints who lived at Lydda. There he found a certain man named Aeneas, who had been bedridden for eight years, because he was paralyzed. Peter said to him, “Aeneas, Jesus Christ heals you. Get up and make your bed!” Immediately he arose. All who lived at Lydda and in Sharon saw him, and they turned to the Lord.

d. Acts 9:28 TR and NU add “and going out”.
e. Acts 9:29 TR and NU omit “Jesus” and reverse the order of verses 28 & 29.
f. Acts 9:29 The Hellenists were Hebrews who used Greek language and culture.
g. Acts 9:30 The word for “brothers” here and where the context allows may also be correctly translated “brothers and sisters” or “siblings.” 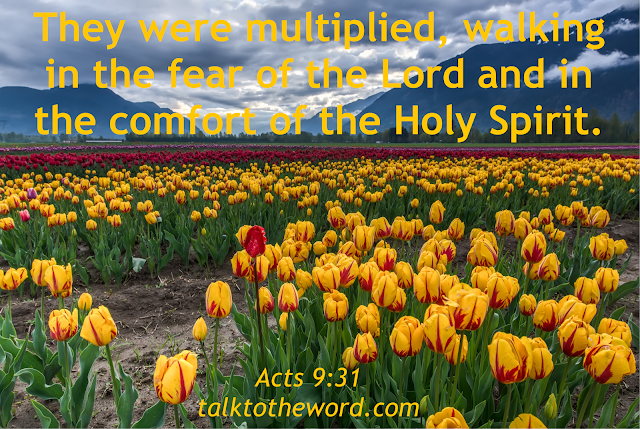