Lord said to him, “Go your way, for he is my chosen vessel to bear my name before the nations and kings, and the children of Israel.” 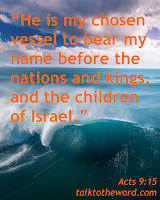 Acts 9 [10.] Now there was a certain disciple at Damascus named Ananias. The Lord said to him in a vision, “Ananias!”

Acts 9 [11.] The Lord said to him, “Arise, and go to the street which is called Straight, and inquire in the house of Judah[c] for one named Saul, a man of Tarsus. For behold, he is praying, and in a vision he has seen a man named Ananias coming in, and laying his hands on him, that he might receive his sight.”

Acts 9 [13.] But Ananias answered, “Lord, I have heard from many about this man, how much evil he did to your saints at Jerusalem. Here he has authority from the chief priests to bind all who call on your name.”

Acts 9 [15.] But the Lord said to him, “Go your way, for he is my chosen vessel to bear my name before the nations and kings, and the children of Israel. For I will show him how many things he must suffer for my name’s sake.”

Acts 9 [17.] Ananias departed, and entered into the house. Laying his hands on him, he said, “Brother Saul, the Lord, who appeared to you on the road by which you came, has sent me, that you may receive your sight, and be filled with the Holy Spirit.” Immediately something like scales fell from his eyes, and he received his sight. He arose and was baptized. He took food and was strengthened. Saul stayed several days with the disciples who were at Damascus. Immediately in the synagogues he proclaimed the Christ, that he is the Son of God. All who heard him were amazed, and said, “Isn’t this he who in Jerusalem made havoc of those who called on this name? And he had come here intending to bring them bound before the chief priests!”


vessel
PIB Scriptures are derived from the World English Bible 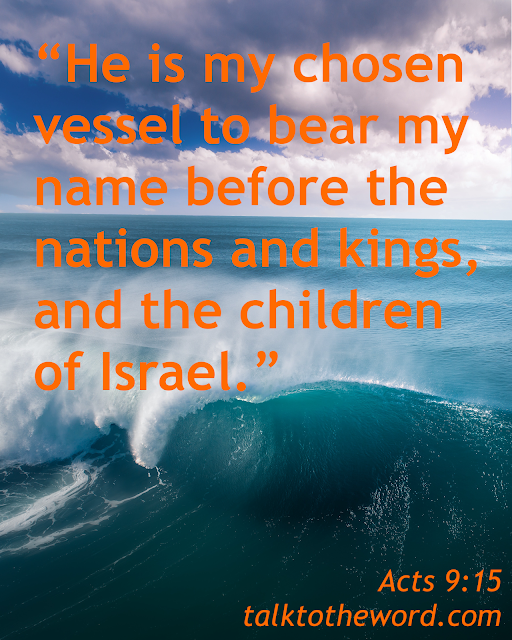