hospitable to one another without grumbling. As each has received a gift, employ it in serving one another, as good managers of the grace of God in its various forms.

Peter 4 [6.] For to this end the Good News was preached even to the dead, that they might be judged indeed as men in the flesh, but live as to God in the spirit. But the end of all things is near. Therefore be of sound mind, self-controlled, and sober in prayer. And above all things be earnest in your love among yourselves, for love covers a multitude of sins. Be hospitable to one another without grumbling.

1 Peter 4 [10.] As each has received a gift, employ it in serving one another, as good managers of the grace of God in its various forms. If anyone speaks, let it be as it were the very words of God. If anyone serves, let it be as of the strength which God supplies, that in all things God may be glorified through Jesus Christ, to whom belong the glory and the dominion forever and ever. Amen.

1 Peter 4 [12.] Beloved, don’t be astonished at the fiery trial which has come upon you, to test you, as though a strange thing happened to you. But because you are partakers of Christ’s sufferings, rejoice; that at the revelation of his glory you also may rejoice with exceeding joy. If you are insulted for the name of Christ, you are blessed; because the Spirit of glory and of God rests on you. On their part he is blasphemed, but on your part he is glorified. 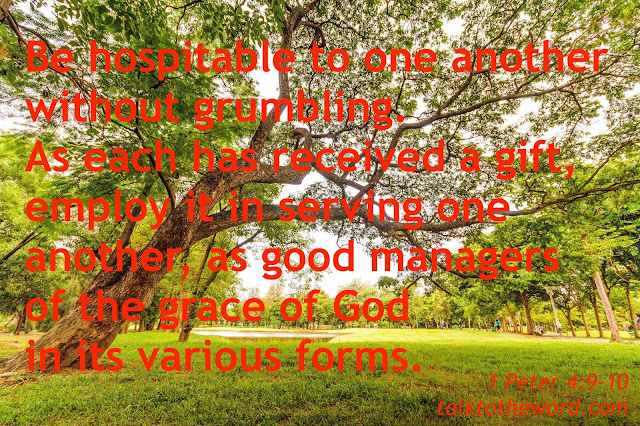