were saved in hope, but hope that is seen is not hope. For who hopes for that which he sees? But if we hope for that which we don’t see, we wait for it with patience.

Romans 8 [16.] The Spirit himself testifies with our spirit that we are children of God; and if children, then heirs; heirs of God, and joint heirs with Christ; if indeed we suffer with him, that we may also be glorified with him. For I consider that the sufferings of this present time are not worthy to be compared with the glory which will be revealed toward us. For the creation waits with eager expectation for the children of God to be revealed.

Romans 8 [20.] For the creation was subjected to vanity, not of its own will, but because of him who subjected it, in hope that the creation itself also will be delivered from the bondage of decay into the liberty of the glory of the children of God. For we know that the whole creation groans and travails in pain together until now. Not only so, but ourselves also, who have the first fruits of the Spirit, even we ourselves groan within ourselves, waiting for adoption, the redemption of our body. For we were saved in hope, but hope that is seen is not hope. For who hopes for that which he sees? 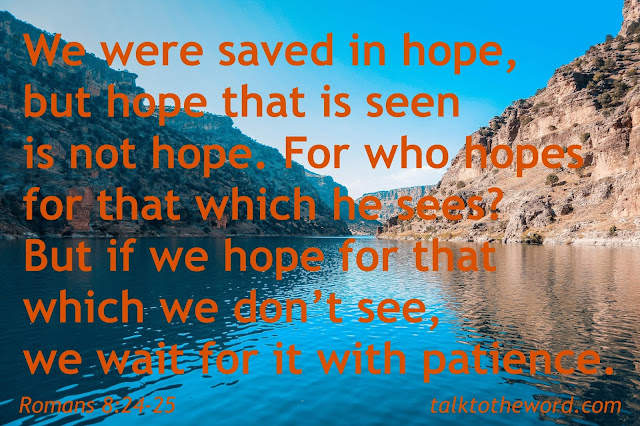