commandment, which was for life, this I found to be for death; for sin, finding occasion through the commandment, deceived me, and through it killed me.

Romans 7 [5.] For when we were in the flesh, the sinful passions which were through the law, worked in our members to bring out fruit to death. But now we have been discharged from the law, having died to that in which we were held; so that we serve in newness of the spirit, and not in oldness of the letter.

Romans 7 [13.] Did then that which is good become death to me? May it never be! But sin, that it might be shown to be sin, by working death to me through that which is good; that through the commandment sin might become exceedingly sinful. For we know that the law is spiritual, but I am fleshly, sold under sin. For I don’t know what I am doing. For I don’t practice what I desire to do; but what I hate, that I do. But if what I don’t desire, that I do, I consent to the law that it is good. So now it is no more I that do it, but sin which dwells in me. For I know that in me, that is, in my flesh, dwells no good thing. For desire is present with me, but I don’t find it doing that which is good. For the good which I desire, I don’t do; but the evil which I don’t desire, that I practice. 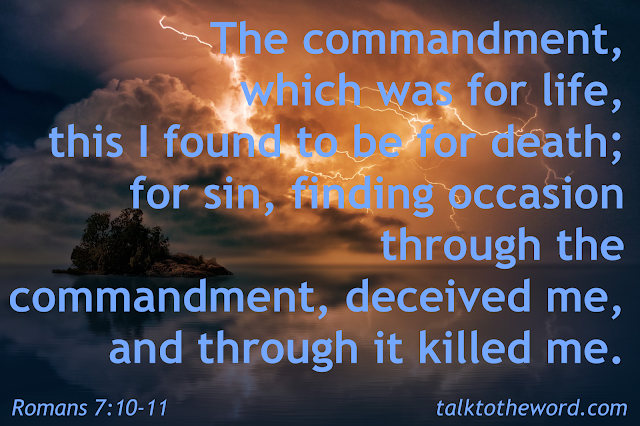