who sits on the throne said, “Behold, I am making all things new.” He said, “Write, for these words of God are faithful and true.”

Revelation 21 [1.] I saw a new heaven and a new earth: for the first heaven and the first earth have passed away, and the sea is no more. I saw the holy city, New Jerusalem, coming down out of heaven from God, prepared like a bride adorned for her husband. I heard a loud voice out of heaven saying, “Behold, God’s dwelling is with people, and he will dwell with them, and they will be his people, and God himself will be with them as their God. He will wipe away from them every tear from their eyes. Death will be no more; neither will there be mourning, nor crying, nor pain, any more. The first things have passed away.”

Revelation 21 [5.] He who sits on the throne said, “Behold, I am making all things new.” He said, “Write, for these words of God are faithful and true.” He said to me, “It is done! I am the Alpha and the Omega, the Beginning and the End. I will give freely to him who is thirsty from the spring of the water of life. He who overcomes, I will give him these things. I will be his God, and he will be my son. But for the cowardly, unbelieving, sinners, abominable, murderers, sexually immoral, sorcerers,[a] idolaters, and all liars, their part is in the lake that burns with fire and sulfur, which is the second death.”

Revelation 21 [9.] One of the seven angels who had the seven bowls, who were loaded with the seven last plagues came, and he spoke with me, saying, “Come here. I will show you the wife, the Lamb’s bride.” He carried me away in the Spirit to a great and high mountain, and showed me the holy city, Jerusalem, coming down out of heaven from God, having the glory of God. Her light was like a most precious stone, as if it were a jasper stone, clear as crystal; having a great and high wall; having twelve gates, and at the gates twelve angels; and names written on them, which are the names of the twelve tribes of the children of Israel. On the east were three gates; and on the north three gates; and on the south three gates; and on the west three gates. The wall of the city had twelve foundations, and on them twelve names of the twelve Apostles of the Lamb.

a. Revelation 21:8 The word for “sorcerers” here also includes users of potions and drugs.


faithful
PIB Scriptures are derived from the World English Bible 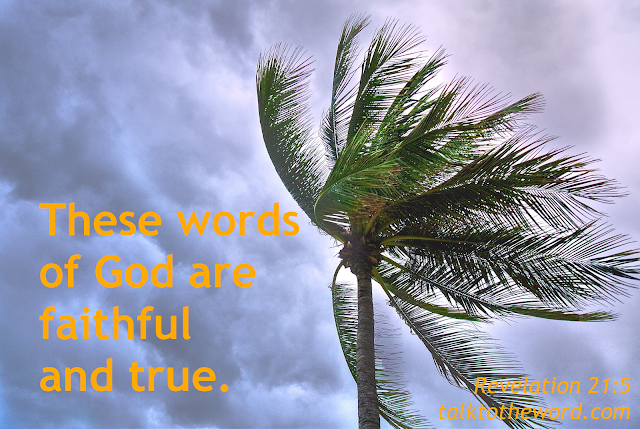