split rocks in the wilderness, and gave them drink abundantly as out of the depths.

Psalm 78 [10.] They didn’t keep God’s covenant,
and refused to walk in his law.
They forgot his doings,
his wondrous deeds that he had shown them.
He did marvelous things in the sight of their fathers,
in the land of Egypt, in the field of Zoan.
He split the sea, and caused them to pass through.
He made the waters stand as a heap.
In the daytime he also led them with a cloud,
and all night with a light of fire.
He split rocks in the wilderness,
and gave them drink abundantly as out of the depths.
He brought streams also out of the rock,
and caused waters to run down like rivers.
Yet they still went on to sin against him,
to rebel against the Most High in the desert.
They tempted God in their heart
by asking food according to their desire.
Yes, they spoke against God.
They said, “Can God prepare a table in the wilderness? 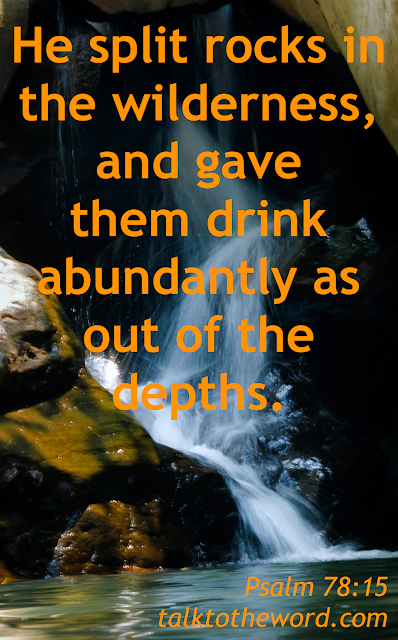