causes the upright to go astray in an evil way, he will fall into his own trap; but the blameless will inherit good.

Proverbs 28 [5.] Evil men don’t understand justice;
but those who seek Yahweh understand it fully.
Better is the poor who walks in his integrity,
than he who is perverse in his ways, and he is rich.
Whoever keeps the law is a wise son;
but he who is a companion of gluttons shames his father.
He who increases his wealth by excessive interest
gathers it for one who has pity on the poor.
He who turns away his ear from hearing the law,
even his prayer is an abomination.

Proverbs 28 [10.] Whoever causes the upright to go astray in an evil way,
he will fall into his own trap;
but the blameless will inherit good.
The rich man is wise in his own eyes;
but the poor who has understanding sees through him.
When the righteous triumph, there is great glory;
but when the wicked rise, men hide themselves.
He who conceals his sins doesn’t prosper,
but whoever confesses and renounces them finds mercy.
Blessed is the man who always fears;
but one who hardens his heart falls into trouble.


upright
PIB Scriptures are derived from the World English Bible 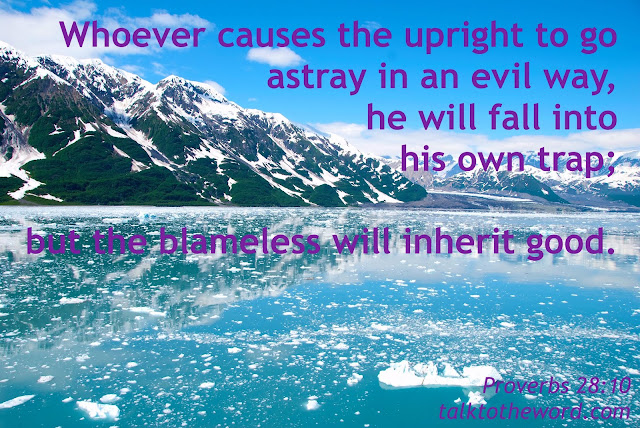