wicked flee when no one pursues; but the righteous are as bold as a lion.

Proverbs 27 [25.] The hay is removed, and the new growth appears,
the grasses of the hills are gathered in.
The lambs are for your clothing,
and the goats are the price of a field.
There will be plenty of goats’ milk for your food,
for your family’s food,
and for the nourishment of your servant girls.

Proverbs 28 [1.] The wicked flee when no one pursues;
but the righteous are as bold as a lion.
In rebellion, a land has many rulers,
but order is maintained by a man of understanding and knowledge.
A needy man who oppresses the poor
is like a driving rain which leaves no crops.
Those who forsake the law praise the wicked;
but those who keep the law contend with them.

Proverbs 28 [5.] Evil men don’t understand justice;
but those who seek Yahweh understand it fully.
Better is the poor who walks in his integrity,
than he who is perverse in his ways, and he is rich.
Whoever keeps the law is a wise son;
but he who is a companion of gluttons shames his father.
He who increases his wealth by excessive interest
gathers it for one who has pity on the poor.
He who turns away his ear from hearing the law,
even his prayer is an abomination. 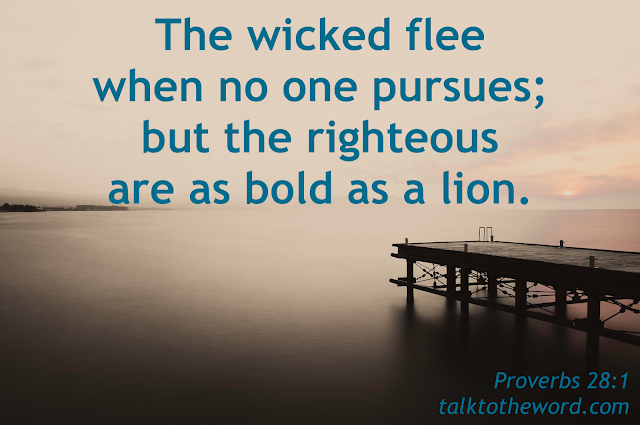