who goes about as a tale-bearer reveals secrets; therefore don’t keep company with him who opens wide his lips.

Proverbs 20 [10.] Differing weights and differing measures,
both of them alike are an abomination to Yahweh.
Even a child makes himself known by his doings,
whether his work is pure, and whether it is right.
The hearing ear, and the seeing eye,
Yahweh has made even both of them.
Don’t love sleep, lest you come to poverty.
Open your eyes, and you shall be satisfied with bread.
“It’s no good, it’s no good,” says the buyer;
but when he is gone his way, then he boasts.

Proverbs 20 [15.] There is gold and abundance of rubies;
but the lips of knowledge are a rare jewel.
Take the garment of one who puts up collateral for a stranger;
and hold him in pledge for a wayward woman.
Fraudulent food is sweet to a man,
but afterwards his mouth is filled with gravel.
Plans are established by advice;
by wise guidance you wage war!
He who goes about as a tale-bearer reveals secrets;
therefore don’t keep company with him who opens wide his lips.

Proverbs 20 [20.] Whoever curses his father or his mother,
his lamp shall be put out in blackness of darkness.
An inheritance quickly gained at the beginning,
won’t be blessed in the end.
Don’t say, “I will pay back evil.”
Wait for Yahweh, and he will save you.
Yahweh detests differing weights,
and dishonest scales are not pleasing.
A man’s steps are from Yahweh;
how then can man understand his way? 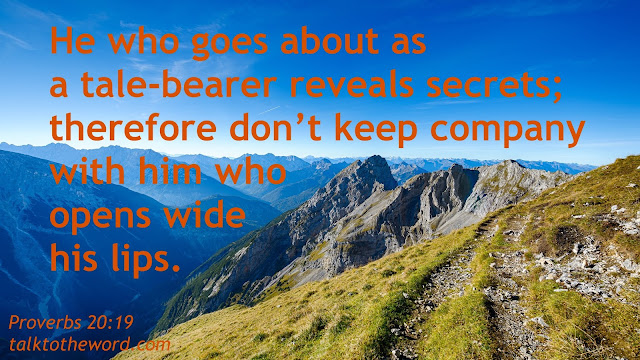