is the poor who walks in his integrity than he who is perverse in his lips and is a fool.

Proverbs 18 [20.] A man’s stomach is filled with the fruit of his mouth.
With the harvest of his lips he is satisfied.
Death and life are in the power of the tongue;
those who love it will eat its fruit.
Whoever finds a wife finds a good thing,
and obtains favor of Yahweh.
The poor plead for mercy,
but the rich answer harshly.
A man of many companions may be ruined,
but there is a friend who sticks closer than a brother.

Proverbs 19 [1.] Better is the poor who walks in his integrity
than he who is perverse in his lips and is a fool.
It isn’t good to have zeal without knowledge;
nor being hasty with one’s feet and missing the way.
The foolishness of man subverts his way;
his heart rages against Yahweh.
Wealth adds many friends,
but the poor is separated from his friend.


integrity
PIB Scriptures are derived from the World English Bible 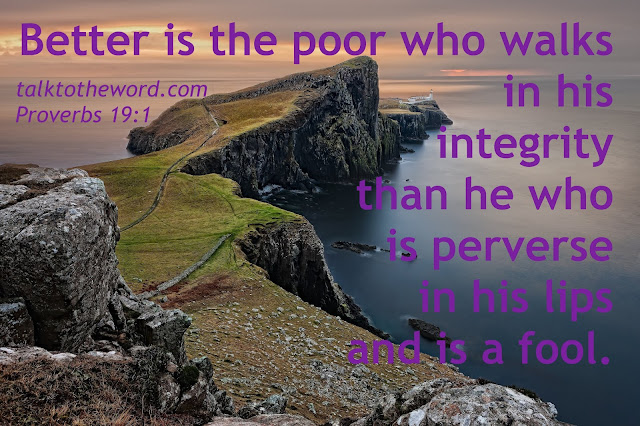