glad heart makes a cheerful face; but an aching heart breaks the spirit.

Proverbs 15 [10.] There is stern discipline for one who forsakes the way:
whoever hates reproof shall die.
Sheol[a] and Abaddon are before Yahweh—
how much more then the hearts of the children of men!
A scoffer doesn’t love to be reproved;
he will not go to the wise.
A glad heart makes a cheerful face;
but an aching heart breaks the spirit.
The heart of one who has understanding seeks knowledge,
but the mouths of fools feed on folly.

Proverbs 15 [15.] All the days of the afflicted are wretched,
but one who has a cheerful heart enjoys a continual feast.
Better is little, with the fear of Yahweh,
than great treasure with trouble.
Better is a dinner of herbs, where love is,
than a fattened calf with hatred.
A wrathful man stirs up contention,
but one who is slow to anger appeases strife.
The way of the sluggard is like a thorn patch,
but the path of the upright is a highway.


emotion
PIB Scriptures are derived from the World English Bible 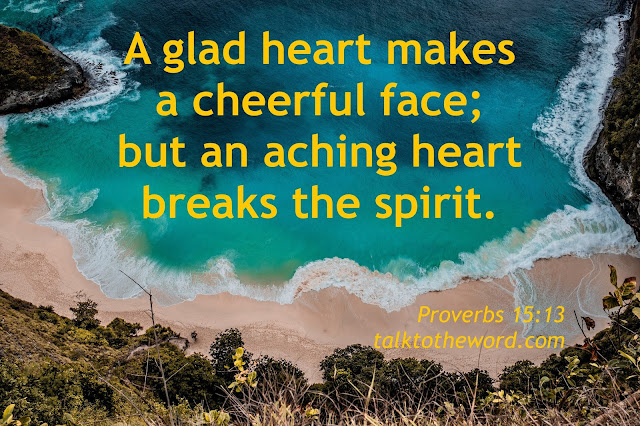