in laughter the heart may be sorrowful, and mirth may end in heaviness.

Proverbs 14 [5.] A truthful witness will not lie,
but a false witness pours out lies.
A scoffer seeks wisdom, and doesn’t find it,
but knowledge comes easily to a discerning person.
Stay away from a foolish man,
for you won’t find knowledge on his lips.
The wisdom of the prudent is to think about his way,
but the folly of fools is deceit.
Fools mock at making atonement for sins,
but among the upright there is good will.

Proverbs 14 [10.] The heart knows its own bitterness and joy;
he will not share these with a stranger.
The house of the wicked will be overthrown,
but the tent of the upright will flourish.
There is a way which seems right to a man,
but in the end it leads to death.
Even in laughter the heart may be sorrowful,
and mirth may end in heaviness.
The unfaithful will be repaid for his own ways;
likewise a good man will be rewarded for his ways.

Proverbs 14 [15.] A simple man believes everything,
but the prudent man carefully considers his ways.
A wise man fears, and shuns evil,
but the fool is hot headed and reckless.
He who is quick to become angry will commit folly,
and a crafty man is hated.
The simple inherit folly,
but the prudent are crowned with knowledge.
The evil bow down before the good,
and the wicked at the gates of the righteous.


despair
PIB Scriptures are derived from the World English Bible 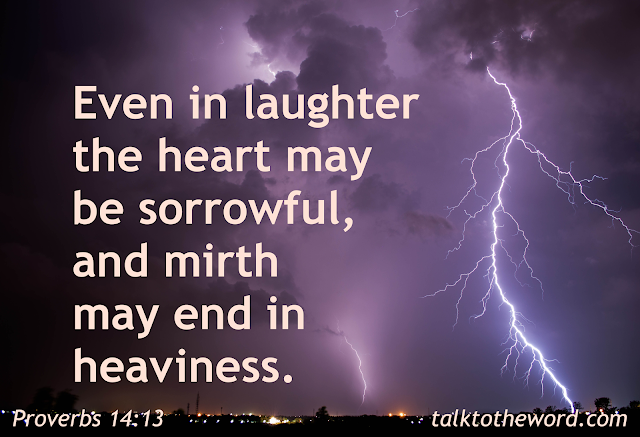