tell you that you are Peter, and on this rock I will build my assembly, and the gates of Hades will not prevail against it.”

Matthew 16 [12.] Then they understood that he didn’t tell them to beware of the yeast of bread, but of the teaching of the Pharisees and Sadducees. Now when Jesus came into the parts of Caesarea Philippi, he asked his disciples, saying, “Who do men say that I, the Son of Man, am?”

Matthew 16 [14.] They said, “Some say John the Baptizer, some, Elijah, and others, Jeremiah, or one of the prophets.”

Matthew 16 [17.] Jesus answered him, “Blessed are you, Simon Bar Jonah, for flesh and blood has not revealed this to you, but my Father who is in heaven. I also tell you that you are Peter,[a] and on this rock[b] I will build my assembly, and the gates of Hades[c] will not prevail against it. I will give to you the keys of the Kingdom of Heaven, and whatever you bind on earth will have been bound in heaven; and whatever you release on earth will have been released in heaven.” Then he commanded the disciples that they should tell no one that he was Jesus the Christ. From that time, Jesus began to show his disciples that he must go to Jerusalem and suffer many things from the elders, chief priests, and scribes, and be killed, and the third day be raised up. 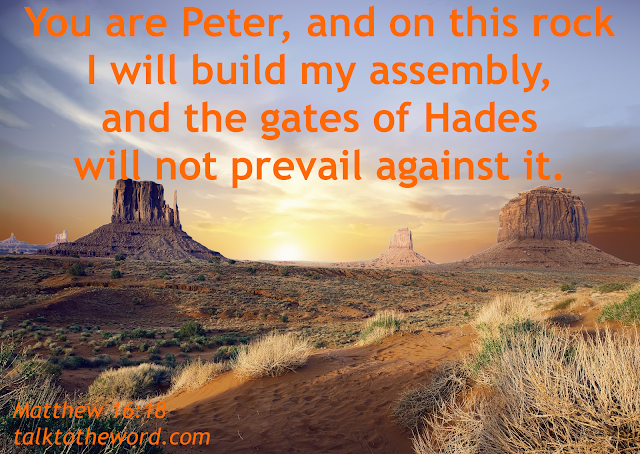