Matthew 14 [18.] He said, “Bring them here to me.” He commanded the multitudes to sit down on the grass; and he took the five loaves and the two fish, and looking up to heaven, he blessed, broke and gave the loaves to the disciples, and the disciples gave to the multitudes. They all ate, and were filled. They took up twelve baskets full of that which remained left over from the broken pieces. Those who ate were about five thousand men, besides women and children.

Matthew 14 [22.] Immediately Jesus made the disciples get into the boat, and to go ahead of him to the other side, while he sent the multitudes away. After he had sent the multitudes away, he went up into the mountain by himself to pray. When evening had come, he was there alone. But the boat was now in the middle of the sea, distressed by the waves, for the wind was contrary. In the fourth watch of the night,[a] Jesus came to them, walking on the sea.[b] When the disciples saw him walking on the sea, they were troubled, saying, “It’s a ghost!” and they cried out for fear. But immediately Jesus spoke to them, saying “Cheer up! It is I![c] Don’t be afraid.”

Peter stepped down from the boat, and walked on the waters to come to Jesus. But when he saw that the wind was strong, he was afraid, and beginning to sink, he cried out, saying, “Lord, save me!”

Matthew 14 [31.] Immediately Jesus stretched out his hand, took hold of him, and said to him, “You of little faith, why did you doubt?” When they got up into the boat, the wind ceased. Those who were in the boat came and worshiped him, saying, “You are truly the Son of God!”


fearful
PIB Scriptures are derived from the World English Bible 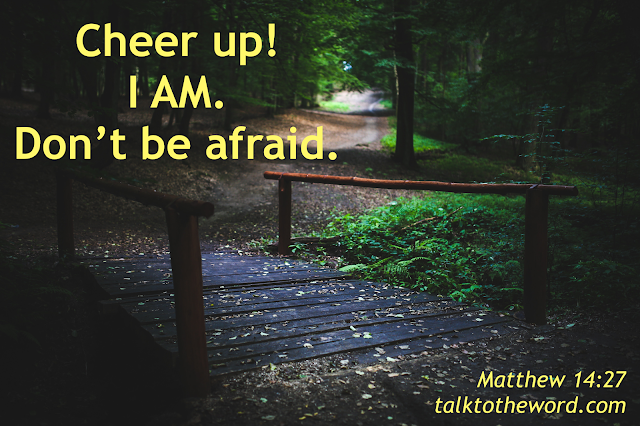