does the will of my Father who is in heaven, he is my brother, and sister, and mother.”

Matthew 12 [48.] But he answered him who spoke to him, “Who is my mother? Who are my brothers?” He stretched out his hand towards his disciples, and said, “Behold, my mother and my brothers! For whoever does the will of my Father who is in heaven, he is my brother, and sister, and mother.”

Matthew 13 [1.] On that day Jesus went out of the house, and sat by the seaside. Great multitudes gathered to him, so that he entered into a boat, and sat, and all the multitude stood on the beach. He spoke to them many things in parables, saying, “Behold, a farmer went out to sow. As he sowed, some seeds fell by the roadside, and the birds came and devoured them. Others fell on rocky ground, where they didn’t have much soil, and immediately they sprang up, because they had no depth of earth. When the sun had risen, they were scorched. Because they had no root, they withered away. Others fell among thorns. The thorns grew up and choked them. Others fell on good soil, and yielded fruit: some one hundred times as much, some sixty, and some thirty. He who has ears to hear, let him hear.” 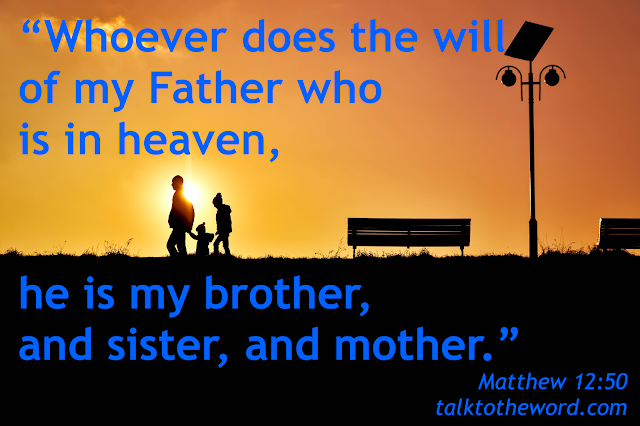