the multitudes were amazed, and said, “Can this be the son of David?”

Matthew 12 [22.] Then one possessed by a demon, blind and mute, was brought to him and he healed him, so that the blind and mute man both spoke and saw. All the multitudes were amazed, and said, “Can this be the son of David?” But when the Pharisees heard it, they said, “This man does not cast out demons, except by Beelzebul, the prince of the demons.”

Matthew 12 [25.] Knowing their thoughts, Jesus said to them, “Every kingdom divided against itself is brought to desolation, and every city or house divided against itself will not stand. If Satan casts out Satan, he is divided against himself. How then will his kingdom stand? If I by Beelzebul cast out demons, by whom do your children cast them out? Therefore they will be your judges. But if I by the Spirit of God cast out demons, then God’s Kingdom has come upon you. Or how can one enter into the house of the strong man, and plunder his goods, unless he first bind the strong man? Then he will plunder his house. 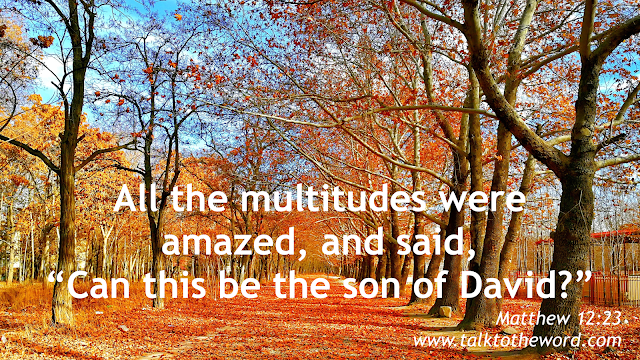