a house is divided against itself, that house cannot stand.”

Mark 3 [20.] The multitude came together again, so that they could not so much as eat bread. When his friends heard it, they went out to seize him: for they said, “He is insane.” The scribes who came down from Jerusalem said, “He has Beelzebul,” and, “By the prince of the demons he casts out the demons.”

Mark 3 [23.] He summoned them, and said to them in parables, “How can Satan cast out Satan? If a kingdom is divided against itself, that kingdom cannot stand. If a house is divided against itself, that house cannot stand. If Satan has risen up against himself, and is divided, he can’t stand, but has an end. But no one can enter into the house of the strong man to plunder, unless he first binds the strong man; and then he will plunder his house. Most certainly I tell you, all sins of the descendants of man will be forgiven, including their blasphemies with which they may blaspheme; but whoever may blaspheme against the Holy Spirit never has forgiveness, but is subject to eternal condemnation.”[a] —because they said, “He has an unclean spirit.”

Mark 3 [31.] His mother and his brothers came, and standing outside, they sent to him, calling him. A multitude was sitting around him, and they told him, “Behold, your mother, your brothers, and your sisters[b] are outside looking for you.” 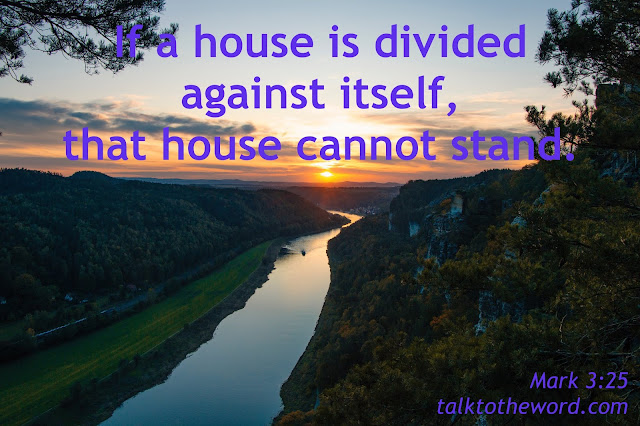