were all amazed, so that they questioned among themselves, saying, “What is this? A new teaching? For with authority he commands even the unclean spirits, and they obey him!”

Mark 1 [18.] Immediately they left their nets, and followed him. Going on a little further from there, he saw James the son of Zebedee, and John, his brother, who were also in the boat mending the nets. Immediately he called them, and they left their father, Zebedee, in the boat with the hired servants, and went after him. They went into Capernaum, and immediately on the Sabbath day he entered into the synagogue and taught. They were astonished at his teaching, for he taught them as having authority, and not as the scribes. Immediately there was in their synagogue a man with an unclean spirit, and he cried out, saying, “Ha! What do we have to do with you, Jesus, you Nazarene? Have you come to destroy us? I know you who you are: the Holy One of God!”

Mark 1 [26.] The unclean spirit, convulsing him and crying with a loud voice, came out of him. They were all amazed, so that they questioned among themselves, saying, “What is this? A new teaching? For with authority he commands even the unclean spirits, and they obey him!” The report of him went out immediately everywhere into all the region of Galilee and its surrounding area.

Mark 1 [29.] Immediately, when they had come out of the synagogue, they came into the house of Simon and Andrew, with James and John. Now Simon’s wife’s mother lay sick with a fever, and immediately they told him about her. He came and took her by the hand, and raised her up. The fever left her, and she served them. At evening, when the sun had set, they brought to him all who were sick, and those who were possessed by demons. All the city was gathered together at the door. He healed many who were sick with various diseases, and cast out many demons. He didn’t allow the demons to speak, because they knew him.


wonder
PIB Scriptures are derived from the World English Bible 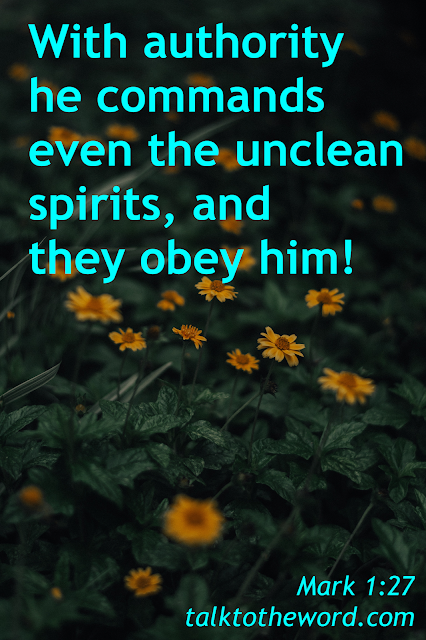