him were the twelve, and certain women who had been healed of evil spirits and infirmities: Mary who was called Magdalene, from whom seven demons had gone out; and Joanna, the wife of Chuzas, Herod’s steward; Susanna; and many others; who served them from their possessions.


Luke 7 [36.] One of the Pharisees invited him to eat with him. He entered into the Pharisee’s house, and sat at the table. Behold, a woman in the city who was a sinner, when she knew that he was reclining in the Pharisee’s house, she brought an alabaster jar of ointment. Standing behind at his feet weeping, she began to wet his feet with her tears, and she wiped them with the hair of her head, kissed his feet, and anointed them with the ointment. Now when the Pharisee who had invited him saw it, he said to himself, “This man, if he were a prophet, would have perceived who and what kind of woman this is who touches him, that she is a sinner.”

Luke 7 [41.] “A certain lender had two debtors. The one owed five hundred denarii, and the other fifty. When they couldn’t pay, he forgave them both. Which of them therefore will love him most?”

He said to him, “You have judged correctly.” Turning to the woman, he said to Simon, “Do you see this woman? I entered into your house, and you gave me no water for my feet, but she has wet my feet with her tears, and wiped them with the hair of her head. You gave me no kiss, but she, since the time I came in, has not ceased to kiss my feet. You didn’t anoint my head with oil, but she has anointed my feet with ointment. Therefore I tell you, her sins, which are many, are forgiven, for she loved much. But to whom little is forgiven, the same loves little.” He said to her, “Your sins are forgiven.”

Luke 7 [49.] Those who sat at the table with him began to say to themselves, “Who is this who even forgives sins?”

Luke 8 [1.] Soon afterwards, he went about through cities and villages, preaching and bringing the good news of God’s Kingdom. With him were the twelve, and certain women who had been healed of evil spirits and infirmities: Mary who was called Magdalene, from whom seven demons had gone out; and Joanna, the wife of Chuzas, Herod’s steward; Susanna; and many others; who served them[a] from their possessions. When a great multitude came together, and people from every city were coming to him, he spoke by a parable. “The farmer went out to sow his seed. As he sowed, some fell along the road, and it was trampled under foot, and the birds of the sky devoured it. Other seed fell on the rock, and as soon as it grew, it withered away, because it had no moisture. Other fell amid the thorns, and the thorns grew with it, and choked it. Other fell into the good ground, and grew, and produced one hundred times as much fruit.” As he said these things, he called out, “He who has ears to hear, let him hear!”

Luke 8 [9.] Then his disciples asked him, “What does this parable mean?”

Luke 8 [10.] He said, “To you it is given to know the mysteries of God’s Kingdom, but to the rest in parables; that ‘seeing they may not see, and hearing they may not understand.’[b] Now the parable is this: The seed is the word of God. Those along the road are those who hear, then the devil comes, and takes away the word from their heart, that they may not believe and be saved. Those on the rock are they who, when they hear, receive the word with joy; but these have no root, who believe for a while, then fall away in time of temptation. That which fell among the thorns, these are those who have heard, and as they go on their way they are choked with cares, riches, and pleasures of life, and bring no fruit to maturity. That in the good ground, these are such as in an honest and good heart, having heard the word, hold it tightly, and produces fruit with patience. 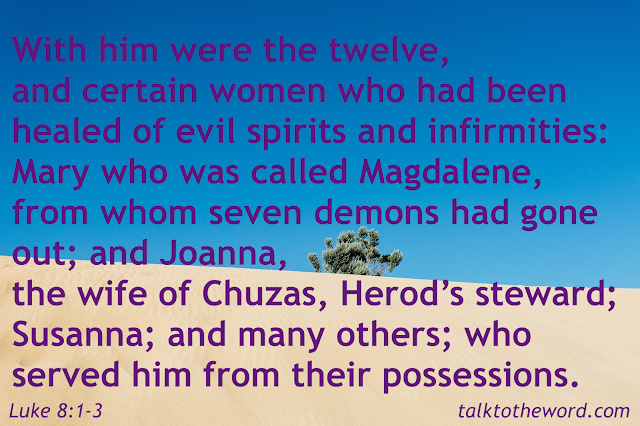