Luke 7 [31.] [b] “To what then will I liken the people of this generation? What are they like? They are like children who sit in the marketplace, and call to one another, saying, ‘We piped to you, and you didn’t dance. We mourned, and you didn’t weep.’ For John the Baptizer came neither eating bread nor drinking wine, and you say, ‘He has a demon.’ The Son of Man has come eating and drinking, and you say, ‘Behold, a gluttonous man, and a drunkard; a friend of tax collectors and sinners!’ Wisdom is justified by all her children.”

Luke 7 [36.] One of the Pharisees invited him to eat with him. He entered into the Pharisee’s house, and sat at the table. Behold, a woman in the city who was a sinner, when she knew that he was reclining in the Pharisee’s house, she brought an alabaster jar of ointment. Standing behind at his feet weeping, she began to wet his feet with her tears, and she wiped them with the hair of her head, kissed his feet, and anointed them with the ointment. Now when the Pharisee who had invited him saw it, he said to himself, “This man, if he were a prophet, would have perceived who and what kind of woman this is who touches him, that she is a sinner.”

Luke 7 [41.] “A certain lender had two debtors. The one owed five hundred denarii, and the other fifty. When they couldn’t pay, he forgave them both. Which of them therefore will love him most?”

He said to him, “You have judged correctly.” Turning to the woman, he said to Simon, “Do you see this woman? I entered into your house, and you gave me no water for my feet, but she has wet my feet with her tears, and wiped them with the hair of her head. You gave me no kiss, but she, since the time I came in, has not ceased to kiss my feet. You didn’t anoint my head with oil, but she has anointed my feet with ointment. Therefore I tell you, her sins, which are many, are forgiven, for she loved much. But to whom little is forgiven, the same loves little.” He said to her, “Your sins are forgiven.”

kiss
PIB Scriptures are derived from the World English Bible 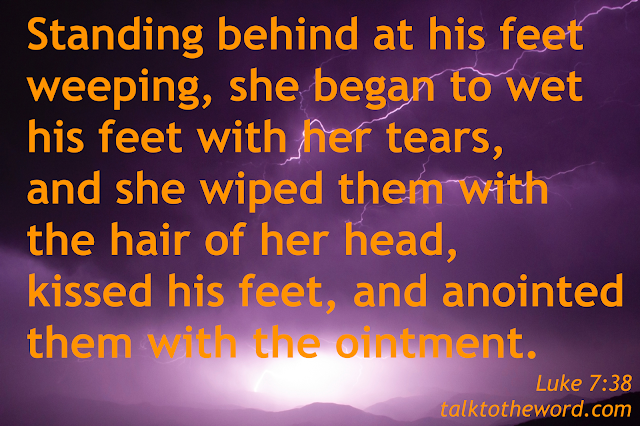