was teaching them on the Sabbath day, and they were astonished at his teaching, for his word was with authority.

Luke 4 [23.] He said to them, “Doubtless you will tell me this parable, ‘Physician, heal yourself! Whatever we have heard done at Capernaum, do also here in your hometown.’” He said, “Most certainly I tell you, no prophet is acceptable in his hometown. But truly I tell you, there were many widows in Israel in the days of Elijah, when the sky was shut up three years and six months, when a great famine came over all the land. Elijah was sent to none of them, except to Zarephath, in the land of Sidon, to a woman who was a widow. There were many lepers in Israel in the time of Elisha the prophet, yet not one of them was cleansed, except Naaman, the Syrian.”

Luke 4 [28.] They were all filled with wrath in the synagogue, as they heard these things. They rose up, threw him out of the city, and led him to the brow of the hill that their city was built on, that they might throw him off the cliff. But he, passing through the middle of them, went his way.

Luke 4 [31.] He came down to Capernaum, a city of Galilee. He was teaching them on the Sabbath day, and they were astonished at his teaching, for his word was with authority. In the synagogue there was a man who had a spirit of an unclean demon, and he cried out with a loud voice, saying, “Ah! what have we to do with you, Jesus of Nazareth? Have you come to destroy us? I know you who you are: the Holy One of God!”

Luke 4 [35.] Jesus rebuked him, saying, “Be silent, and come out of him!” When the demon had thrown him down in the middle of them, he came out of him, having done him no harm. 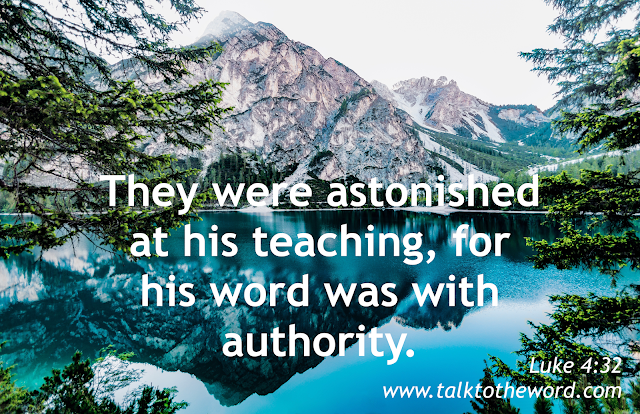