said, “I will surely go with you. Nevertheless, the journey that you take won’t be for your honor; for Yahweh will sell Sisera into a woman’s hand.” Deborah arose, and went with Barak to Kedesh.

Judges 4 [1.] The children of Israel again did that which was evil in Yahweh’s sight, when Ehud was dead. Yahweh sold them into the hand of Jabin king of Canaan, who reigned in Hazor; the captain of whose army was Sisera, who lived in Harosheth of the Gentiles. The children of Israel cried to Yahweh, for he had nine hundred chariots of iron; and he mightily oppressed the children of Israel for twenty years. Now Deborah, a prophetess, the wife of Lappidoth, judged Israel at that time. She lived under Deborah’s palm tree between Ramah and Bethel in the hill country of Ephraim; and the children of Israel came up to her for judgment. She sent and called Barak the son of Abinoam out of Kedesh Naphtali, and said to him, “Hasn’t Yahweh, the God of Israel, commanded, ‘Go and lead the way to Mount Tabor, and take with you ten thousand men of the children of Naphtali and of the children of Zebulun? I will draw to you, to the river Kishon, Sisera, the captain of Jabin’s army, with his chariots and his multitude; and I will deliver him into your hand.’”

Judges 4 [9.] She said, “I will surely go with you. Nevertheless, the journey that you take won’t be for your honor; for Yahweh will sell Sisera into a woman’s hand.” Deborah arose, and went with Barak to Kedesh.

Judges 4 [10.] Barak called Zebulun and Naphtali together to Kedesh; and ten thousand men followed him; and Deborah went up with him. Now Heber the Kenite had separated himself from the Kenites, even from the children of Hobab, Moses’ brother-in-law, and had pitched his tent as far as the oak in Zaanannim, which is by Kedesh. They told Sisera that Barak the son of Abinoam was gone up to Mount Tabor. Sisera gathered together all his chariots, even nine hundred chariots of iron, and all the people who were with him, from Harosheth of the Gentiles, to the river Kishon.

Judges 4 [14.] Deborah said to Barak, “Go; for this is the day in which Yahweh has delivered Sisera into your hand. Hasn’t Yahweh gone out before you?” So Barak went down from Mount Tabor, and ten thousand men after him. Yahweh confused Sisera, all his chariots, and all his army, with the edge of the sword before Barak. Sisera abandoned his chariot and fled away on his feet. But Barak pursued the chariots and the army to Harosheth of the Gentiles; and all the army of Sisera fell by the edge of the sword. There was not a man left.


Judges 4 [17.] However Sisera fled away on his feet to the tent of Jael the wife of Heber the Kenite; for there was peace between Jabin the king of Hazor and the house of Heber the Kenite. Jael went out to meet Sisera, and said to him, “Turn in, my lord, turn in to me; don’t be afraid.” He came in to her into the tent, and she covered him with a rug.

She opened a bottle of milk, and gave him a drink, and covered him.

Judges 4 [21.] Then Jael Heber’s wife took a tent peg, and took a hammer in her hand, and went softly to him, and struck the pin into his temples, and it pierced through into the ground; for he was in a deep sleep; so he fainted and died. Behold, as Barak pursued Sisera, Jael came out to meet him, and said to him, “Come, and I will show you the man whom you seek.” He came to her; and behold, Sisera lay dead, and the tent peg was in his temples. So God subdued Jabin the king of Canaan before the children of Israel on that day. The hand of the children of Israel prevailed more and more against Jabin the king of Canaan, until they had destroyed Jabin king of Canaan.

Judges 5 [15.] The princes of Issachar were with Deborah.
As was Issachar, so was Barak.
They rushed into the valley at his feet.
By the watercourses of Reuben,
there were great resolves of heart.
Why did you sit among the sheepfolds?
To hear the whistling for the flocks?
At the watercourses of Reuben,
there were great searchings of heart.
Gilead lived beyond the Jordan.
Why did Dan remain in ships?
Asher sat still at the haven of the sea,
and lived by his creeks.
Zebulun was a people that jeopardized their lives to the death;
Naphtali also, on the high places of the field.
“The kings came and fought,
then the kings of Canaan fought at Taanach by the waters of Megiddo.
They took no plunder of silver.

Judges 5 [20.] From the sky the stars fought.
From their courses, they fought against Sisera.
The river Kishon swept them away,
that ancient river, the river Kishon.
My soul, march on with strength.
Then the horse hoofs stamped because of the prancing,
the prancing of their strong ones.
‘Curse Meroz,’ said Yahweh’s angel.
‘Curse bitterly its inhabitants,
because they didn’t come to help Yahweh,
to help Yahweh against the mighty.’
“Jael shall be blessed above women,
the wife of Heber the Kenite;
blessed shall she be above women in the tent.

Judges 5 [25.] He asked for water.
She gave him milk.
She brought him butter in a lordly dish.
She put her hand to the tent peg,
and her right hand to the workmen’s hammer.
With the hammer she struck Sisera.
She struck through his head.
Yes, she pierced and struck through his temples.
At her feet he bowed, he fell, he lay.
At her feet he bowed, he fell.
Where he bowed, there he fell down dead.

“Through the window she looked out, and cried:
Sisera’s mother looked through the lattice.
‘Why is his chariot so long in coming?
Why do the wheels of his chariots wait?’
Her wise ladies answered her,
Yes, she returned answer to herself, 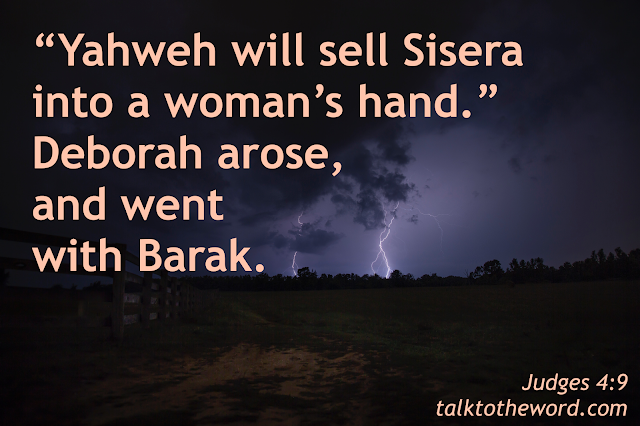