Jews persecuted Jesus, and sought to kill him, because he did these things on the Sabbath. But Jesus answered them, “My Father is still working, so I am working, too.”

John 5 [13.] But he who was healed didn’t know who it was, for Jesus had withdrawn, a crowd being in the place.

John 5 [14.] Afterward Jesus found him in the temple, and said to him, “Behold, you are made well. Sin no more, so that nothing worse happens to you.”

John 5 [15.] The man went away, and told the Jews that it was Jesus who had made him well. For this cause the Jews persecuted Jesus, and sought to kill him, because he did these things on the Sabbath. But Jesus answered them, “My Father is still working, so I am working, too.” For this cause therefore the Jews sought all the more to kill him, because he not only broke the Sabbath, but also called God his own Father, making himself equal with God. Jesus therefore answered them, “Most certainly, I tell you, the Son can do nothing of himself, but what he sees the Father doing. For whatever things he does, these the Son also does likewise. For the Father has affection for the Son, and shows him all things that he himself does. He will show him greater works than these, that you may marvel. For as the Father raises the dead and gives them life, even so the Son also gives life to whom he desires. For the Father judges no one, but he has given all judgment to the Son, that all may honor the Son, even as they honor the Father. He who doesn’t honor the Son doesn’t honor the Father who sent him.


industrious
PIB Scriptures are derived from the World English Bible 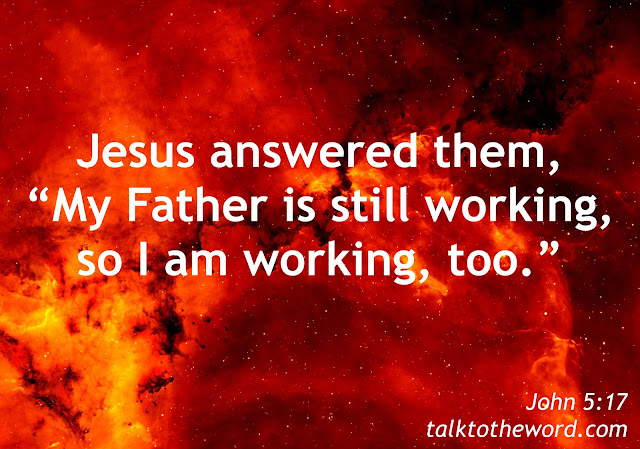