anyone listens to my sayings, and doesn’t believe, I don’t judge him. For I came not to judge the world, but to save the world.”

John 12 [41.] Isaiah said these things when he saw his glory, and spoke of him. [i] Nevertheless even of the rulers many believed in him, but because of the Pharisees they didn’t confess it, so that they wouldn’t be put out of the synagogue, for they loved men’s praise more than God’s praise.

John 12 [44.] Jesus cried out and said, “Whoever believes in me, believes not in me, but in him who sent me. He who sees me sees him who sent me. I have come as a light into the world, that whoever believes in me may not remain in the darkness. If anyone listens to my sayings, and doesn’t believe, I don’t judge him. For I came not to judge the world, but to save the world. He who rejects me, and doesn’t receive my sayings, has one who judges him. The word that I spoke, the same will judge him in the last day. For I spoke not from myself, but the Father who sent me, he gave me a commandment, what I should say, and what I should speak. I know that his commandment is eternal life. The things therefore which I speak, even as the Father has said to me, so I speak.”

John 13 [1.] Now before the feast of the Passover, Jesus, knowing that his time had come that he would depart from this world to the Father, having loved his own who were in the world, he loved them to the end. During supper, the devil having already put into the heart of Judas Iscariot, Simon’s son, to betray him, Jesus, knowing that the Father had given all things into his hands, and that he came from God, and was going to God, arose from supper, and laid aside his outer garments. He took a towel, and wrapped a towel around his waist. Then he poured water into the basin, and began to wash the disciples’ feet, and to wipe them with the towel that was wrapped around him. 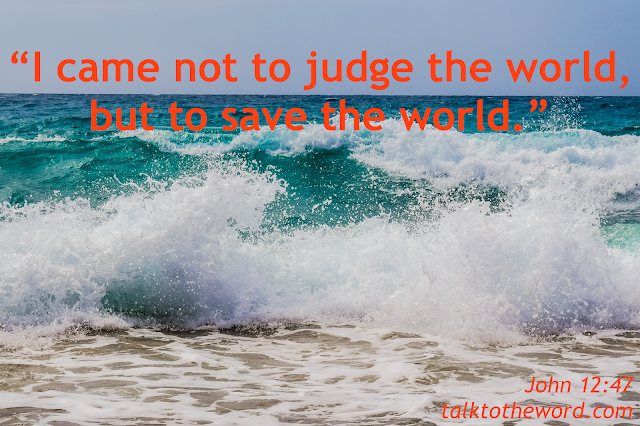