who is wise in heart, and mighty in strength: who has hardened himself against him, and prospered?

Job 8 [20.] “Behold, God will not cast away a blameless man,
neither will he uphold the evildoers.
He will still fill your mouth with laughter,
your lips with shouting.
Those who hate you shall be clothed with shame.
The tent of the wicked shall be no more.”

“Truly I know that it is so,
but how can man be just with God?
If he is pleased to contend with him,
he can’t answer him one time in a thousand.
God who is wise in heart, and mighty in strength:
who has hardened himself against him, and prospered?
He removes the mountains, and they don’t know it,
when he overturns them in his anger.
He shakes the earth out of its place.
Its pillars tremble.
He commands the sun, and it doesn’t rise,
and seals up the stars.
He alone stretches out the heavens,
and treads on the waves of the sea.
He makes the Bear, Orion, and the Pleiades,
and the rooms of the south. 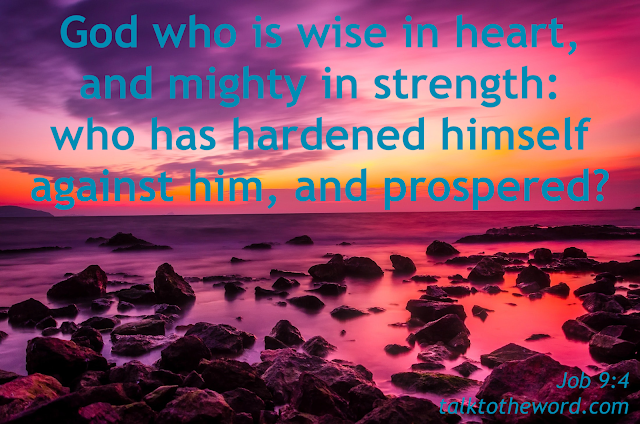