opened his mouth, and cursed the day of his birth. Job answered: “Let the day perish in which I was born, the night which said, ‘There is a boy conceived.’” 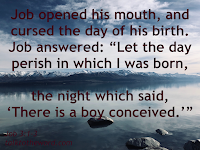 Job 2 [11.] Now when Job’s three friends heard of all this evil that had come on him, they each came from his own place: Eliphaz the Temanite, Bildad the Shuhite, and Zophar the Naamathite, and they made an appointment together to come to sympathize with him and to comfort him. When they lifted up their eyes from a distance, and didn’t recognize him, they raised their voices, and wept; and they each tore his robe, and sprinkled dust on their heads toward the sky. So they sat down with him on the ground seven days and seven nights, and no one spoke a word to him, for they saw that his grief was very great.


Job 3 [1.] After this Job opened his mouth, and cursed the day of his birth. Job answered:

“Let the day perish in which I was born,
the night which said, ‘There is a boy conceived.’
Let that day be darkness.
Don’t let God from above seek for it,
neither let the light shine on it.
Let darkness and the shadow of death claim it for their own.
Let a cloud dwell on it.
Let all that makes black the day terrify it.
As for that night, let thick darkness seize on it.
Let it not rejoice among the days of the year.
Let it not come into the number of the months.
Behold, let that night be barren.
Let no joyful voice come therein.
Let them curse it who curse the day,
who are ready to rouse up leviathan.
Let the stars of its twilight be dark.
Let it look for light, but have none,
neither let it see the eyelids of the morning,


emotion
PIB Scriptures are derived from the World English Bible 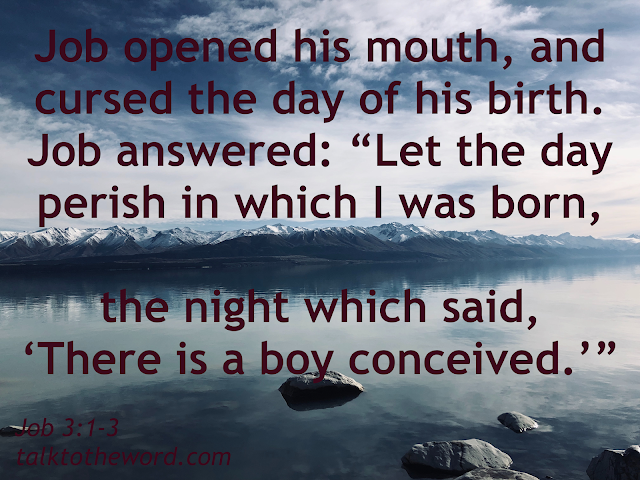