king commanded Ebedmelech the Ethiopian, saying, Take from here thirty men with you, and take up Jeremiah the prophet out of the dungeon, before he dies.

Jeremiah 38 [5.] Zedekiah the king said, Behold, he is in your hand; for the king is not he who can do anything against you. Then took they Jeremiah, and cast him into the dungeon of Malchijah the king’s son, that was in the court of the guard: and they let down Jeremiah with cords. In the dungeon there was no water, but mire; and Jeremiah sank in the mire. Now when Ebedmelech the Ethiopian, a eunuch, who was in the king’s house, heard that they had put Jeremiah in the dungeon (the king then sitting in the gate of Benjamin), Ebedmelech went out of the king’s house, and spoke to the king, saying, My lord the king, these men have done evil in all that they have done to Jeremiah the prophet, whom they have cast into the dungeon; and he is likely to die in the place where he is, because of the famine; for there is no more bread in the city.

Jeremiah 38 [10.] Then the king commanded Ebedmelech the Ethiopian, saying, Take from here thirty men with you, and take up Jeremiah the prophet out of the dungeon, before he dies. So Ebedmelech took the men with him, and went into the house of the king under the treasury, and took there rags and worn-out garments, and let them down by cords into the dungeon to Jeremiah. Ebedmelech the Ethiopian said to Jeremiah, Put now these rags and worn-out garments under your armpits under the cords. Jeremiah did so. So they drew up Jeremiah with the cords, and took him up out of the dungeon: and Jeremiah remained in the court of the guard. Then Zedekiah the king sent, and took Jeremiah the prophet to him into the third entry that is in Yahweh’s house: and the king said to Jeremiah, I will ask you something. Hide nothing from me.

Jeremiah 38 [15.] Then Jeremiah said to Zedekiah, If I declare it to you, will you not surely put me to death? and if I give you counsel, you will not listen to me. So Zedekiah the king swore secretly to Jeremiah, saying, As Yahweh lives, who made us this soul, I will not put you to death, neither will I give you into the hand of these men who seek your life. Then Jeremiah said to Zedekiah, Yahweh, the God of Armies, the God of Israel, says: If you will go out to the king of Babylon’s princes, then your soul shall live, and this city shall not be burned with fire; and you shall live, and your house. But if you will not go out to the king of Babylon’s princes, then shall this city be given into the hand of the Chaldeans, and they shall burn it with fire, and you shall not escape out of their hand. Zedekiah the king said to Jeremiah, I am afraid of the Jews who are fallen away to the Chaldeans, lest they deliver me into their hand, and they mock me.


jail
PIB Scriptures are derived from the World English Bible 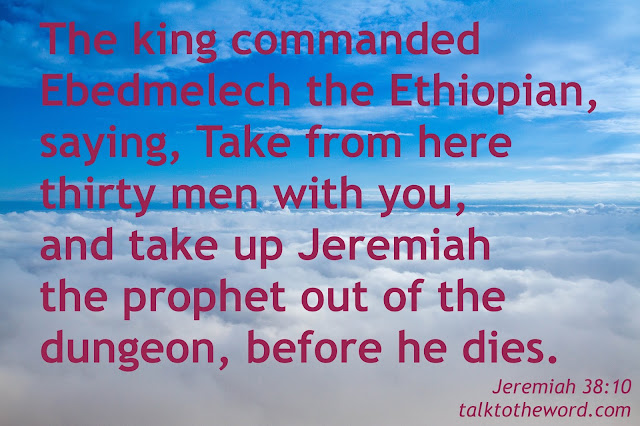