Jeremiah 33 [1.] Moreover Yahweh’s word came to Jeremiah the second time, while he was yet shut up in the court of the guard, saying, Yahweh who does it, Yahweh who forms it to establish it; Yahweh is his name, says: Call to me, and I will answer you, and will show you great things, and difficult, which you don’t know. For Yahweh, the God of Israel, says concerning the houses of this city, and concerning the houses of the kings of Judah, which are broken down to make a defense against the mounds and against the sword;

Jeremiah 33 [5.] while men come to fight with the Chaldeans, and to fill them with the dead bodies of men, whom I have killed in my anger and in my wrath, and for all whose wickedness I have hidden my face from this city: Behold, I will bring it health and cure, and I will cure them; and I will reveal to them abundance of peace and truth. I will cause the captivity of Judah and the captivity of Israel to return, and will build them, as at the first. I will cleanse them from all their iniquity, by which they have sinned against me; and I will pardon all their iniquities, by which they have sinned against me, and by which they have transgressed against me. This city shall be to me for a name of joy, for a praise and for a glory, before all the nations of the earth, which shall hear all the good that I do to them, and shall fear and tremble for all the good and for all the peace that I procure to it.

undefiled
PIB Scriptures are derived from the World English Bible 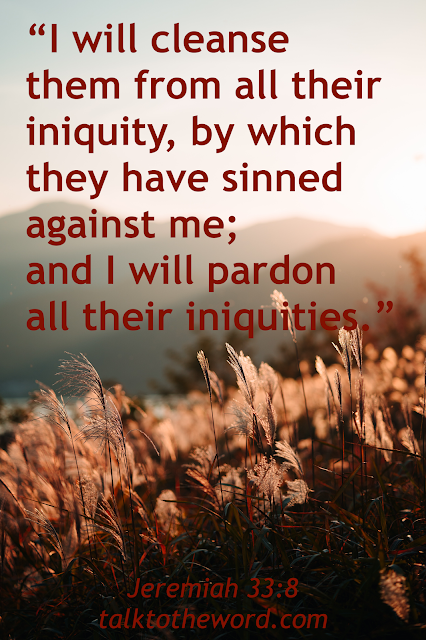