Lord Yahweh! Behold, you have made the heavens and the earth by your great power and by your outstretched arm; there is nothing too hard for you.

Jeremiah 32 [15.] For Yahweh of Armies, the God of Israel says: Houses and fields and vineyards shall yet again be bought in this land. Now after I had delivered the deed of the purchase to Baruch the son of Neriah, I prayed to Yahweh, saying, Ah Lord Yahweh! Behold, you have made the heavens and the earth by your great power and by your outstretched arm; there is nothing too hard for you, who show loving kindness to thousands, and recompense the iniquity of the fathers into the bosom of their children after them; the great, the mighty God, Yahweh of Armies is his name; great in counsel, and mighty in work; whose eyes are open to all the ways of the sons of men, to give everyone according to his ways, and according to the fruit of his doings:

Jeremiah 32 [20.] who performed signs and wonders in the land of Egypt, even to this day, both in Israel and among other men; and made yourself a name, as it is today; and brought your people Israel out of the land of Egypt with signs, and with wonders, and with a strong hand, and with an outstretched arm, and with great terror; and gave them this land, which you swore to their fathers to give them, a land flowing with milk and honey; and they came in, and possessed it, but they didn’t obey your voice, neither walked in your law; they have done nothing of all that you commanded them to do: therefore you have caused all this evil to come upon them. Behold, the mounds, they have come to the city to take it; and the city is given into the hand of the Chaldeans who fight against it, because of the sword, and of the famine, and of the pestilence; and what you have spoken has happened; and behold, you see it. 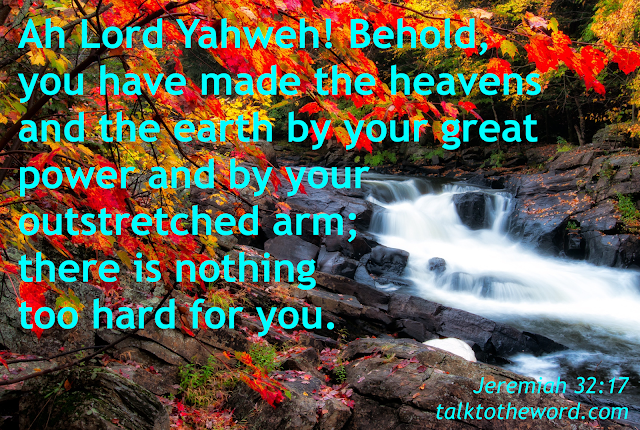