hasn’t entered into holy places made with hands, which are representations of the true, but into heaven itself, now to appear in the presence of God for us.

Hebrews 9 [15.] For this reason he is the mediator of a new covenant, since a death has occurred for the redemption of the transgressions that were under the first covenant, that those who have been called may receive the promise of the eternal inheritance. For where a last will and testament is, there must of necessity be the death of him who made it. For a will is in force where there has been death, for it is never in force while he who made it lives. Therefore even the first covenant has not been dedicated without blood. For when every commandment had been spoken by Moses to all the people according to the law, he took the blood of the calves and the goats, with water and scarlet wool and hyssop, and sprinkled both the book itself and all the people, saying, “This is the blood of the covenant which God has commanded you.”[b]

Hebrews 9 [21.] Moreover he sprinkled the tabernacle and all the vessels of the ministry in the same way with the blood. According to the law, nearly everything is cleansed with blood, and apart from shedding of blood there is no remission. It was necessary therefore that the copies of the things in the heavens should be cleansed with these; but the heavenly things themselves with better sacrifices than these. For Christ hasn’t entered into holy places made with hands, which are representations of the true, but into heaven itself, now to appear in the presence of God for us; nor yet that he should offer himself often, as the high priest enters into the holy place year by year with blood not his own, or else he must have suffered often since the foundation of the world. But now once at the end of the ages, he has been revealed to put away sin by the sacrifice of himself.

Hebrews 9 [27.] Inasmuch as it is appointed for men to die once, and after this, judgment, so Christ also, having been offered once to bear the sins of many, will appear a second time, without sin, to those who are eagerly waiting for him for salvation.

Hebrews 10 [1.] For the law, having a shadow of the good to come, not the very image of the things, can never with the same sacrifices year by year, which they offer continually, make perfect those who draw near. Or else wouldn’t they have ceased to be offered, because the worshipers, having been once cleansed, would have had no more consciousness of sins? But in those sacrifices there is a yearly reminder of sins. For it is impossible that the blood of bulls and goats should take away sins. 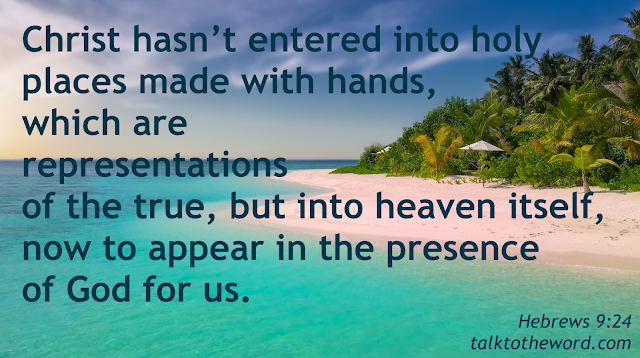