was a keeper of sheep, but Cain was a tiller of the ground.

Genesis 3 [22.] Yahweh God said, “Behold, the man has become like one of us, knowing good and evil. Now, lest he reach out his hand, and also take of the tree of life, and eat, and live forever...” Therefore Yahweh God sent him out from the garden of Eden, to till the ground from which he was taken. So he drove out the man; and he placed cherubim[a] at the east of the garden of Eden, and a flaming sword which turned every way, to guard the way to the tree of life.

Genesis 4 [1.] The man knew[a] Eve his wife. She conceived,[b] and gave birth to Cain, and said, “I have gotten a man with Yahweh’s help.” Again she gave birth, to Cain’s brother Abel. Abel was a keeper of sheep, but Cain was a tiller of the ground. As time passed, Cain brought an offering to Yahweh from the fruit of the ground. Abel also brought some of the firstborn of his flock and of its fat. Yahweh respected Abel and his offering, but he didn’t respect Cain and his offering. Cain was very angry, and the expression on his face fell. Yahweh said to Cain, “Why are you angry? Why has the expression of your face fallen? If you do well, won’t it be lifted up? If you don’t do well, sin crouches at the door. Its desire is for you, but you are to rule over it.” Cain said to Abel, his brother, “Let’s go into the field.” While they were in the field, Cain rose up against Abel, his brother, and killed him. 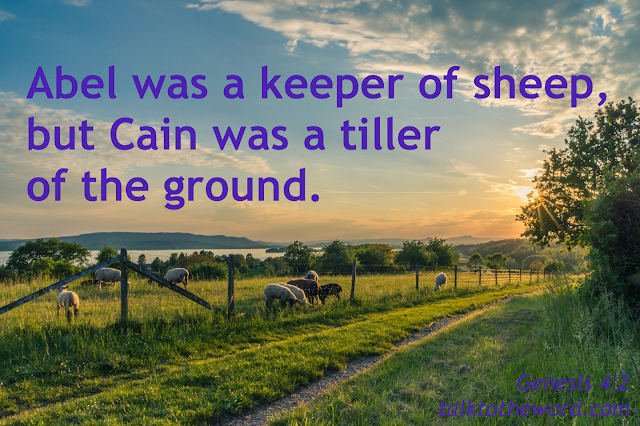