give you of the dew of the sky, of the fatness of the earth, and plenty of grain and new wine.

Genesis 27 [22.] Jacob went near to Isaac his father. He felt him, and said, “The voice is Jacob’s voice, but the hands are the hands of Esau.” He didn’t recognize him, because his hands were hairy, like his brother, Esau’s hands. So he blessed him. He said, “Are you really my son Esau?”

He brought it near to him, and he ate. He brought him wine, and he drank. His father Isaac said to him, “Come near now, and kiss me, my son.” He came near, and kissed him. He smelled the smell of his clothing, and blessed him, and said,

“Behold, the smell of my son
is as the smell of a field which Yahweh has blessed. God give you of the dew of the sky,
of the fatness of the earth,
and plenty of grain and new wine. Let peoples serve you,
and nations bow down to you.
Be lord over your brothers.
Let your mother’s sons bow down to you.
Cursed be everyone who curses you.
Blessed be everyone who blesses you.”

Genesis 27 [30.] As soon as Isaac had finished blessing Jacob, and Jacob had just gone out from the presence of Isaac his father, Esau his brother came in from his hunting. He also made savory food, and brought it to his father. He said to his father, “Let my father arise, and eat of his son’s venison, that your soul may bless me.”

He said, “I am your son, your firstborn, Esau.”


blessing
PIB Scriptures are derived from the World English Bible 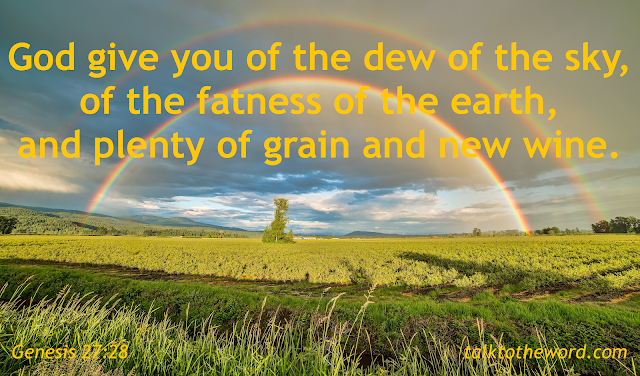