child grew, and was weaned. Abraham made a great feast on the day that Isaac was weaned.

Genesis 21 [1.] Yahweh visited Sarah as he had said, and Yahweh did to Sarah as he had spoken. Sarah conceived, and bore Abraham a son in his old age, at the set time of which God had spoken to him. Abraham called his son who was born to him, whom Sarah bore to him, Isaac. [a] Abraham circumcised his son, Isaac, when he was eight days old, as God had commanded him. Abraham was one hundred years old when his son, Isaac, was born to him. Sarah said, “God has made me laugh. Everyone who hears will laugh with me.” She said, “Who would have said to Abraham, that Sarah would nurse children? For I have borne him a son in his old age.”

Genesis 21 [11.] The thing was very grievous in Abraham’s sight on account of his son. God said to Abraham, “Don’t let it be grievous in your sight because of the boy, and because of your servant. In all that Sarah says to you, listen to her voice. For your offspring[b] will be accounted as from Isaac. I will also make a nation of the son of the servant, because he is your child[c].” Abraham rose up early in the morning, and took bread and a bottle of water, and gave it to Hagar, putting it on her shoulder; and gave her the child, and sent her away. She departed, and wandered in the wilderness of Beersheba. The water in the bottle was spent, and she cast the child under one of the shrubs. She went and sat down opposite him, a good way off, about a bow shot away. For she said, “Don’t let me see the death of the child.” She sat over against him, and lifted up her voice, and wept. God heard the voice of the boy. 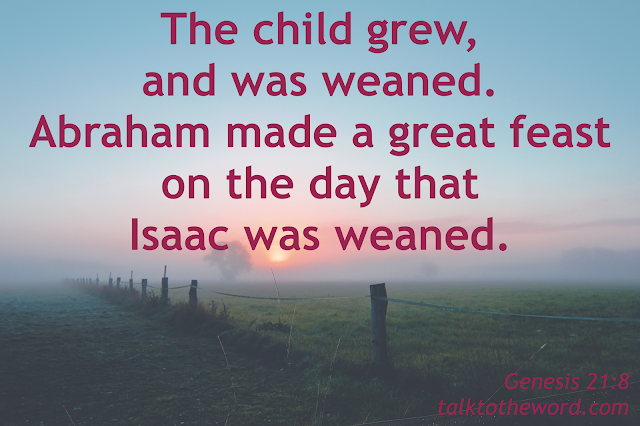