Scriptures imprisoned all things under sin, that the promise by faith in Jesus Christ might be given to those who believe.

Galatians 3 [13.] Christ redeemed us from the curse of the law, having become a curse for us. For it is written, “Cursed is everyone who hangs on a tree,”[e] that the blessing of Abraham might come on the Gentiles through Christ Jesus; that we might receive the promise of the Spirit through faith. Brothers, speaking of human terms, though it is only a man’s covenant, yet when it has been confirmed, no one makes it void, or adds to it. Now the promises were spoken to Abraham and to his offspring.[f] He doesn’t say, “To descendants[g]”, as of many, but as of one, “To your offspring[h]”,[i] which is Christ. Now I say this. A covenant confirmed beforehand by God in Christ, the law, which came four hundred thirty years after, does not annul, so as to make the promise of no effect. For if the inheritance is of the law, it is no more of promise; but God has granted it to Abraham by promise. 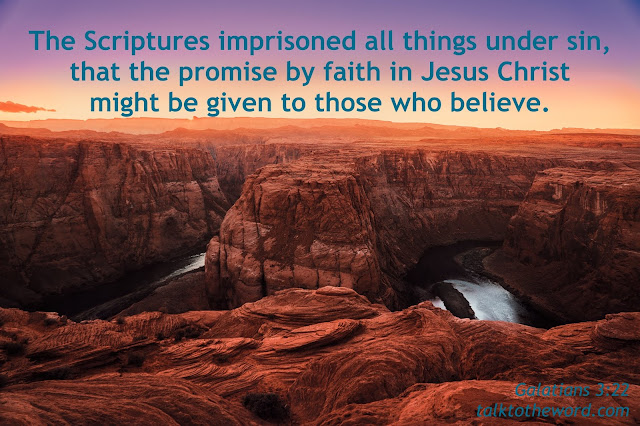