had set his heart to seek Yahweh’s law, and to do it, and to teach in Israel statutes and ordinances.

Ezra 7 [5.] the son of Abishua, the son of Phinehas, the son of Eleazar, the son of Aaron the chief priest; this Ezra went up from Babylon: and he was a ready scribe in the law of Moses, which Yahweh, the God of Israel, had given; and the king granted him all his request, according to Yahweh’s hand his God on him. There went up some of the children of Israel, and of the priests, and the Levites, and the singers, and the porters, and the Nethinim, to Jerusalem, in the seventh year of Artaxerxes the king. He came to Jerusalem in the fifth month, which was in the seventh year of the king. For on the first day of the first month began he to go up from Babylon; and on the first day of the fifth month came he to Jerusalem, according to the good hand of his God on him.

Ezra 7 [10.] For Ezra had set his heart to seek Yahweh’s law, and to do it, and to teach in Israel statutes and ordinances. Now this is the copy of the letter that the king Artaxerxes gave to Ezra the priest, the scribe, even the scribe of the words of Yahweh’s commandments, and of his statutes to Israel: Artaxerxes, king of kings, to Ezra the priest, the scribe of the law of the God of heaven, perfect and so forth. I make a decree, that all those of the people of Israel, and their priests and the Levites, in my realm, who are minded of their own free will to go to Jerusalem, go with you. Because you are sent of the king and his seven counselors, to inquire concerning Judah and Jerusalem, according to the law of your God which is in your hand,

Ezra 7 [15.] and to carry the silver and gold, which the king and his counselors have freely offered to the God of Israel, whose habitation is in Jerusalem, and all the silver and gold that you shall find in all the province of Babylon, with the freewill offering of the people, and of the priests, offering willingly for the house of their God which is in Jerusalem; therefore you shall with all diligence buy with this money bulls, rams, lambs, with their meal offerings and their drink offerings, and shall offer them on the altar of the house of your God which is in Jerusalem. Whatever shall seem good to you and to your brothers to do with the rest of the silver and the gold, do that after the will of your God. The vessels that are given to you for the service of the house of your God, deliver before the God of Jerusalem.


keen
PIB Scriptures are derived from the World English Bible 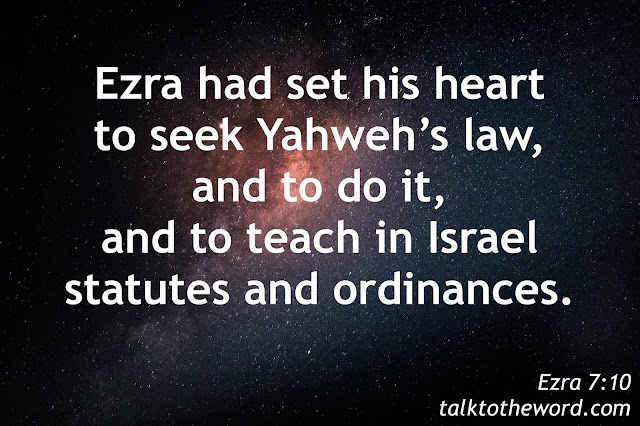